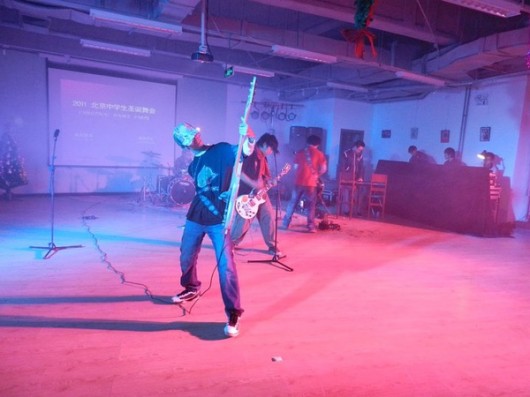 China’s music industry doesn’t have the best reputation. In spite of the achievements of independent artists, the domestic music industry remains obsessed with fresh-faced idols cultivated in the Korean and Japanese pop model.

It’s a world where trendiness drums out any notion of musical talent.

“What we’re seeing is an aggressive commercialization of Chinese music,” says Da Meng, the bassist of Screaming Kong. Screaming Kong was founded four years ago by a group of four high school friends. Although the band’s strong grassroots following has brought it several offers from bigger labels, its members have rejected them all.

“We’re not signed because we don’t want to be,” Da Meng said.

China’s music industry has inherited some of the worst elements of the Korean model. Executives focus on building a cult of personality around singers and groups fueled by commercial appearances on variety shows and front-page placements.

It’s a schedule that leaves any signed band with little room for artistic growth.

When talking about their dream, Screaming Kong’s members say they want to sing for friends and strangers rather than appear on the big stage. “We’ve even thought about traveling overseas as street performers,” said Feng Hanbo, the drummer.

“Anyone can perform in the Golden Hall of Vienna or the Sydney Opera House if they can afford the rent. I wouldn’t want to play one of those venues unless we were invited,” he said.

But invitations are unlikely as foreign audiences remain puzzled about what “Chinese music” is.

The independent and commercial scenes are sending the world very mixed messages about Chinese music, and at the moment the commercial scene is winning. Many reviewers, composers and producers see a bright future for China’s commercial music as domestic TV idol contests win attention abroad.

“When we look at the singers who have found fame on stage, we can see the potential for Chinese music to reach a higher level,” said Shan He, a professor at the Tianjin Institute of Music.

As a reviewer on the idol TV show I Am a Singer, Shan’s experience with Chinese music is intimately tied to the commercial side of the industry. But even there he sees hope.

“I am seeing musicians more dedicated to their work and really thinking about what they are singing,” he said. “Seeking a breakthrough is the way they can improve their music.”

Hua Chenyu, the champion of 2013’s Super Boy, was praised by American Idol judge Paula Abdul for his personal interpretation of Lady Gaga’s “Poker Face” during the competition.

But many remain guarded about whether idol-oriented development will give China anything new to bring to the world’s stage.

“We have no idea what our future will be like, nor how the music in China will grow,” Da Meng said. “But a good or bad result depends on the audience.”

This post originally appeared in Beijing Today. (Image via)

7 Responses to “Local Musicians Grapple With “Made In China” Label”