Tom Chou played the Chinese character in the music videos for “Chinese Food” and “Get In My Car,” both produced by “Friday” producer Patrice Wilson. Although criticized by some as racially insensitive and tacky, the two videos together have amassed more than 16 million views on Youtube and Youku. 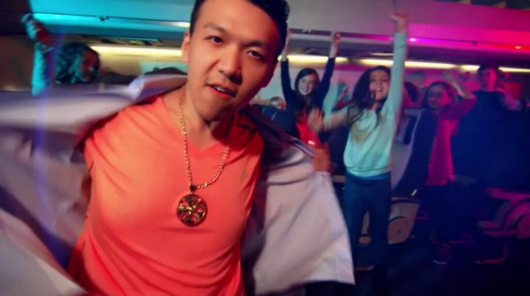 Q: Tell me a little bit about your background.
A: I’m an actor, a stand-up comedian, a theatrical performer, a writer, a singer, a rapper, and blah blah blah person in the entertainment industry. I mean we all have to wear multiple hats in this industry especially as an Asian American Artist (AAA). There is limited opportunity for AAA to shine in front of the big screen, so I try my best to survive in my work field.

Q: How did you get involved with Patrice Wilson of Rebecca Black “Friday” fame?
A: It was just a simple phone call, and that was all. Patrice’s assistant was looking for a Mandarin speaking actor for “Chinese Food,” and my name showed up on a casting website. I guess I was just lucky!

Q: Your recent videos “Chinese Food” and “Get in My Car” both touch on Asian themes and feature Mandarin. Why this China focus?
A: It all started with Chinese Food, and only because Patrice loves Chinese Food, so we made a song about Chinese Food. Despite the remarks and comments from American viewers on YouTube, the song actually had a lot of positive feedbacks from the Chinese viewers on Youku. After the song became a huge hit, he had another vision to make a Chinese song catering to Chinese viewers. I would guess it’s his way of thanking all his Chinese viewers and fans. That is how “Get In The Car” was created.

Q: What have been the reactions to your videos? Have you been getting a lot of reactions from people in China?
A: The song is now 300,000 in China, and we are the top song right now on Youku. We get a lot of comments of the song been very catchy. The music definitely gets stuck in your head when you listen to it just once. It’s Patrice’s magic!! Other comments are there to generate hits for the music video to go viral, so they can be negative, but effective for sustaining views. I, myself, haven’t really seen many reviews about me which I am pretty bummed out about. I also like to get notice! I want to shine too! Thank you Patrick for giving me the spot light here by the way. I think I want to steal the light from Grace since most reviews were about her and not me. HaHa.

Q: “Where is a very good place to ride my horse? Santa Monica, Las Vegas? Where is my coffee mug? Hey, there’s a China Girl!” Which is to say, what exactly?
A: I came up with the lyrics, and I was trying to see how many words I could fit in before Grace sang hers. Actually it’s a mirroring element that we put into the video from Chinese Food if you remember. Patrice likes to bring old elements into the new video. It’s purely experimental, but it’s relatable from one video to another. In Chinese Food, I said everything in Mandarin as quick and as much as possible. Get In My Car is just a reverse of that. Were things very random? Well, you could say that, but it was based on the reverse idea as well. In Chinese Food, I was saying “I would rather make a pancake” while I was cooking noodle. In Get In My Car, I was saying “I would rather ride a horse” while I was on a plane. You get the idea? Another one I would let you guess… it’s from the Rebecca Black’s Friday. (Driving and Rapping in the car…)

Q: Where are you going with these videos? Tell me about the big dream.
A: I’m not going anywhere with these videos since they weren’t really focusing on me! Just kidding. Actually I enjoy working with Patrice and his crew, I would love to work with them on their future projects as well. My big dream is to win Oscar if you ask me, but for these videos, I want people to enjoy, to talk about them, to strike a conversation with someone, to appreciate the art work and music, to come up with more creative comments, and to sing them in the shower. I maybe will follow Patrice’s footstep and create my own music videos and feature different artists in the future.

Q: Why do you think these videos get so many views?
A: Lucky! I’m kidding again. There are so many elements and methods that Patrice put into making a hit. One of the simplest idea is to understand the curiousity of the audience. If I tell you to check out something on youtube that I THINK it’s amazing, you MIGHT watch it. And if I tell you to check out something that is TERRIBLE but definitely have to check it out, you WILL watch it. Because your curiosity will want to see how BAD can this be. The idea of BAD IS GOOD is genius! You rather watch something dramatic and crazy than something boring because it entertains you more.

Q: Anything else you want to tell folks?
A: For all the dreamers out there, myself included, don’t jump off the cliff just yet! I know it’s tough out there, and I’m still struggling like rest of you, but one day your hard work will be known and appreciated. Luck is substantial, but working hard is the key to success. Life is too short to dream big, so dream bigger! See you at the Oscar!

In case you missed the videos: