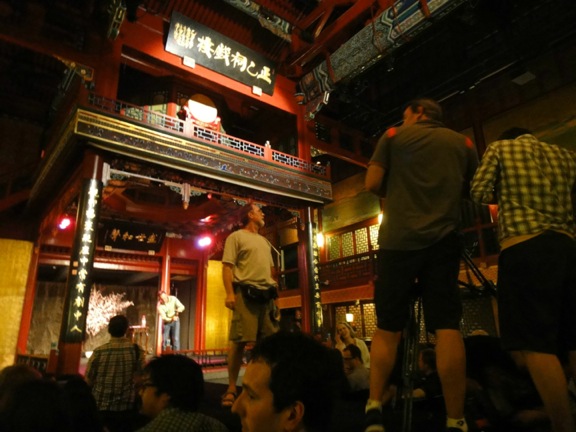 Picture via Reddit user d9-thc on this thread — mostly people lamenting they didn’t know Louis was in town.

I guess Louis CK’s Beijing show, which we told you about last Tuesday (and un-told you about after exorbitant ticket demand made organizers skittery), went off without a hitch. Jacob, who operates the excellent YouTube channel BeijingShenghuo, wrote in about his experience:

I was at the Louis CK show tonight, as per your blog request I’ll tell you a little about it. Kro’s Nest and Slow Boat where there providing pizza and beer (not for free, of course, or even discounted) The set was supposed to be 9 to 10, but doors didn’t actually open till about 9:45, and then it was another 20 minutes or so till Louis came on. I guess he was running late. The guy from Chopschticks (and I guess he works for TheBeijinger, too), warmed up the crowd with some silly jokes about China.

Once Louis came on he talked about his experience in China so far (he’s been here three days and is flying back tomorrow). He talked about how Americans think of China as full of rice paddies and peasants riding bicycles, and he was totally surprised to see that Beijing was an actual city with modern cars and skyscrapers and stuff. I felt like his opening jokes were written with an English-speaking Chinese audience in mind, because he kept saying “you guys” while talking about Chinese people, even though the audience was at least 90% foreigners. Eventually he got to his regular material, which was hilarious as usual (and all of it new). He was trying out new jokes on the crowd, as well, a few of them fell flat but it’s pretty awesome to see how he just rolls with it and makes the fact that his joke didn’t land a joke in and of itself.

I guess the audience got Louis being Louis. If you were at the show last night, we’d love to hear about it. Drop me a note at tao@beijingcream.com.