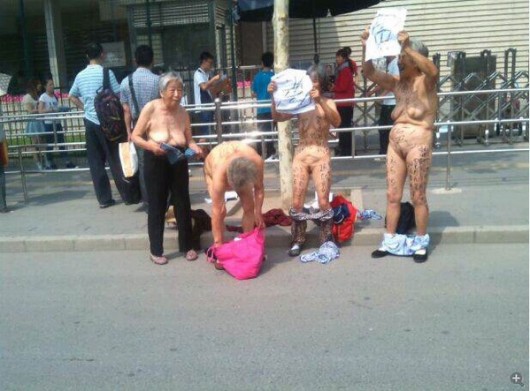 The above was tweeted out by @beidajin this afternoon: around 10 am today* outside the US embassy in Beijing, four grandmothers from Xinyang city, Henan province took off their clothes and raised signs “to cry out for sons and daughters.”

*New Tang Dynasty, reporting from New York, says this incident happened yesterday morning, and that it’s to protest corruption in Henan. (“Henan’s corrupt officials are farm animals,” NTD writes.) NTD isn’t exactly an unbiased source, so take that with a grain of salt.

BJC contributor Patrick Lozada, who lives near the US embassy near Liangmaqiao, has written about petitioners on that road before:

Petitioners like Mrs. Wang have chosen to take their protest to the street in front of the embassy instead of going to the State Bureau for Letters and Calls, the government agency tasked with collecting grievances. Paul Mooney, a veteran China reporter who was denied a Chinese visa last November, has seen many of these protests before.

“There are whole villages of cardboard boxes that have popped up around official places to petition,” Mooney told me in a phone call. “By going to these places, you risk arrest or worse — even the US embassy’s rule of law guy was detained and questioned by the police there.”

More information if it becomes available.