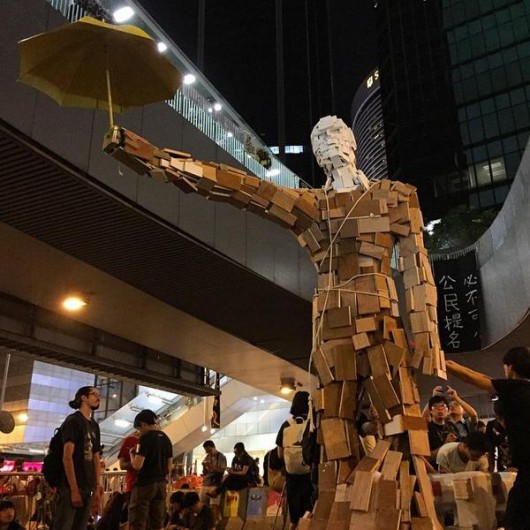 A dispatch from Hong Kong, where life – parties, business — continues as usual… with one high-profile exception.

It’s Day 8 of Occupy Central, or Umbrella Revolution, if you will. A few nights ago I was enjoying a nice steak dinner at La Vache! in the heart of Soho district when the conversation steered itself to the events happening only a few blocks away. As the wine flowed, so did the opinions of the dinner guests.

In case you haven’t heard, tensions are high here in Hong Kong. You feel it on the streets, at dinner tables, and of course on Facebook. The protests kicked off Sunday, September 28, when tear gas exploded, protesters covered their faces with makeshift masks and continued to hold their ground using the only tools they had, sheer numbers, umbrellas, and dare I say maybe a bit of force?… Monday morning came and the crowds dwindled, as peaceful protesters reported to work. As the 6 o’clock bell struck, protesters flooded back to the streets and Occupy Central was yet again in full swing. Rinse and repeat on Tuesday. Wednesday and Thursday saw public holidays here in Hong Kong and reportedly the largest number of protesters, who expanded their hold — Central, Admiralty, Causeway Bay, and Mong Kok had all been occupied. The city was forced to cancel its annual National Day fireworks.

Roads are emptier and the typical wait time at the cross-harbor tunnel is nonexistent, which is nice. The mass transit railway “MTR,” on the other hand, is getting a constant level of insane traffic, usually only seen on Fridays at 6 pm. Those wanting to be part of the action travel via MTR, as all major occupy zones are close to subway stations. Most of the city is still accessible, though some people are experiencing difficulty in maintaining their normal routines. Some schools have been forced to cancel activities, while many business owners are feeling the pressure to think ahead, as rent is due at the end of the month. And let’s not forget our outspoken Hong Kong taxi drivers, who now complain about a slowdown in business.

Outside of occupy zones, city life continues best that it can. The local watering holes in Lan Kwai Fong (Central) are filled with the usual rowdy expats and local ladies doing their best to navigate the steep terrain as they wobble in their four-inch red bottom heels. Shopping malls and restaurants in Tsim Sha Tsui (Kowloon) are full, and though I don’t have access to their financials, it appears it’s business as usual. On Thursday Hong Kong hosted the ever-trendy “Run For Your Lives” zombie race with thousands of people, which ended with a packed after-party including an outdoor concert and live DJs.

As the police sit back and allow the peaceful protesters to carry on, a new wave of Hong Kongers have hit the streets – the “blue ribbons,” who are protesting the protesters. Mong Kok, typically known as one of the more violent parts of the city, where in my earlier days I had been chased from a local karaoke bar in a classic case of a friend speaking to the wrong girl, has seen some of the most physical clashes of pro- and anti-government protesters recently. No surprise.

A group of masked men, who looked eerily similar to the yellow ribbons (the Occupy protesters) fighting on the front lines of Admiralty, also approached the Causeway Bay area and started ripping down barricades in an attempt to take back the streets. “Shame on those cowards for covering their face,” “it was a peaceful protest until they came,” and “where are the police now to stop the violence” are common Facebook status updates by my proud yellow-ribbon-supporting friends. If the police haven’t been overworked enough, they now have a new duty they’re destined to fail at – protecting anti-government protesters. Rumors are swirling that these blue ribbons are merely paid thugs, possibly from the Triad, ordered to create chaos so the police can come in and shut the whole thing down. To top it off, women are reportedly being sexually harassed in the confrontations. Sickening.

At this point, who knows what to believe. I’m no different from most people who’ve settled here and call Hong Kong a second home: I believe in equality and I want to live in a world where we all have a say in choosing the leaders who represent us. But I also understand the perspective of those who have built Hong Kong to where it is today, in spite of a previous generation of colonialists, and shudder at the thought of all that work being undone. So, is the student-led protest the right move for Hong Kong at this time? What about sitting back and doing nothing?

One dinner guest felt strongly that by not participating in the protests, you must be a blue ribbon supporter… maybe a bit strong, but it made me think, what is the other option? If not now, when?

Another friend recommended that the yellow ribbons consolidate to one occupy zone — this would help bring order back to the city and ideally end the violence.

A local friend stuck to his guns and commented that everyone just needs to go home. “You can’t win against Beijing, you’ve made your point, now go home.”

The unfortunate reality is, Hong Kong people are fighting Hong Kong people, and it’s hurting the city. Violence is not the answer, but is blocking the streets and shutting down our city? To end our dinner, we held a final glass of red in the air and yelled “yám bùi” (飲杯, cheers) and toasted to friendship, however divided we were.

At the end of the day, I’m really thankful to live in Hong Kong. I don’t want to see the city take the biggest loss, which I fear is the only outcome — everyone in Hong Kong will lose. 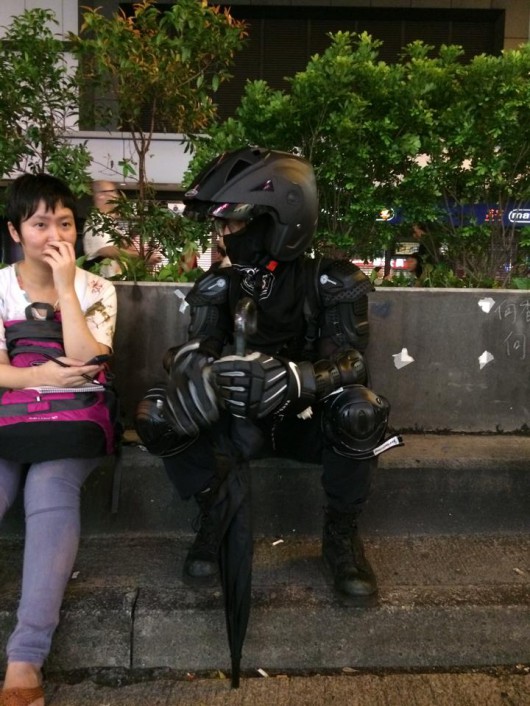