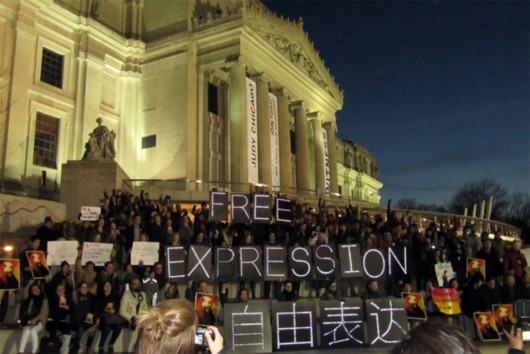 PEN America organized a protest called “Take a Stand for Free Expression in China: An Evening of Literary Protest” last Thursday, April 10, in front of the Brooklyn Public Library in New York. Ai Weiwei was more or less the face of the event, attended by several hundreds of people / bored Brooklynites, which was also had the purpose of raising awareness of persecuted Chinese writers. Art Daily reports that Ai Weiwei appeared via video message to thank his supporters. Surely he would’ve preferred to appear in person, but he still doesn’t have his passport — never has since his 81-day Beijing detention in 2011 for tax evasion.

“As an artist, I think freedom of expression is an essential foundation for any kind of activity,” said Ai, his larger-than-life image hovering on the Brooklyn Museum wall. “Freedom of expression is to encourage every individual to question authority, and to become creative, so these are essential values for artists to protect and to fight for.” The artist ended his video message with a strong statement: “We have to encourage individuals to become a part of the society through free expression … to bare responsibility and to contribute our ideas, our thinking about what kind of society we live in, and what kind of future we will have.”

And here’s a promotional portrait of Ai Weiwei that American artist Shepard Fairey created in his “Obey Giant” style: