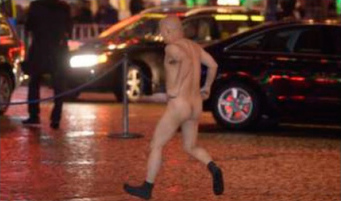 We have come to Sweden to run in the nude, because it was here where Mo Yan, a defender of censorship and a senior Communist cadre, was awarded the Nobel Prize in Literature last year.

With our act, we want to remind this forgetful world that there is a staunch denouncer of censorship, a witness of the Tian’anmen Massacre in 1989, a winner of the Nobel Peace Prize, who was sentenced to eleven years in prison for his writings and views, and he is now behind bars in China. His name is Liu Xiaobo.

With our act, we want to remind this forgetful world an outstanding artist named Liu Xia. She has no particular interest in politics, but just because she is the wife of Liu Xiaobo, she has been placed under house arrest since her husband was awarded the Nobel Peace Prize in October, 2010.

This is not the first time Liao Yiwu, author of Corpse Walker and the prison memoir For a Song and a Hundred Songs (which I reviewed earlier this year), has streaked in Stockholm. He did it last year with artist Meng Huang while Mo Yan was inside the concert hall attending a Nobel Prize ceremony. Mo’s decision to not present an empty chair in honor of Liu Xiaobo set Liao off.

From “Our Naked Declaration” again:

In a world all too surreal, Liu Xia cried out, “Both Mo Yan and Liu Xiaobo are Nobel Laureates, why are they treated so differently?”

Meanwhile, Chinese netizens have been talking about Liu Xiaobo in the context of Nelson Mandela, and the authorities would like them to stop doing that please. Via Reuters:

An influential Chinese paper lashed out on Wednesday at comparisons between Nelson Mandela and China’s jailed Nobel Peace Prize laureate Liu Xiaobo, saying Liu was a common criminal not worthy of any praise.

Many Chinese internet users have noted the apparent contradiction of Beijing lauding Mandela’s legacy at the same time that it continues a harsh crackdown on its own human rights activists.