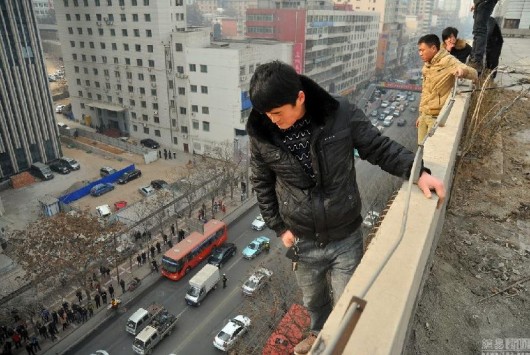 Confrontations over unpaid wages are common in China, especially in the run-up to the lunar new year (it falls on January 31 this year), as this is often the only time when migrant workers can return home. Many fear they’ll never be paid if they leave the city while still owed money.

But to get paid, some have to resort to extreme measures.

Six migrant workers threatened to jump off the roof of a nine-story building in Lanzhou, capital of Gansu province, on January 3 as protest over 240,000 yuan of unpaid wages, ChinaNews.com reports.

They were heard shouting “give back our money.” A large crowd formed on Baiyin Road below. Police and firefighters were called in to mediate.

The six migrant workers were representatives of a construction team contracted by a man named Zhao Yi. They worked on a building project of the Tian’an Construction Machinery Engineering Co., which has been headquartered in the building as early as July 2012. But after finishing the project, the company reportedly did not fulfill their contractual demands. In total, 24 workers were owed 240,000 yuan. Representatives had been demanding the wages for the past five months, while the company kept giving them excuses.

When all measures had been exhausted, six representatives climbed atop the building as a publicity stunt.

The six men were persuaded down after the company promised to fully pay their unpaid earnings. They received 180,000 yuan, or 75 percent of their unpaid salary, shortly after getting down, thanks to help from third parties, according to ChinaNews.com.

Whether the workers will get the remaining 25 percent remains unknown. In any case, in a country where independent trade unions aren’t allowed and labor rights are frequently ignored, this may be as satisfactory an outcome as can be expected.