In a televised statement on Monday at Lido Hotel in Beijing, Malaysian Prime Minister Najib Razak said Malaysia Airlines flight MH370, which has now been missing for 18 days, likely “ended in the southern Indian Ocean.” After his statement, family and friends of MH370 passengers were reportedly notified by text that “none of those on board have survived.”

According to NBC News:

The airline explained in a statement its use of text messages in disseminating the news to family members:

“It is with deep sadness that Malaysia Airlines earlier this evening had to confirm to the families of those on board Flight MH370 that it must now be assumed the flight had been lost. As the Prime Minister said, respect for the families is essential at this difficult time. And it is in that spirit that we informed the majority of the families in advance of the Prime Minister’s statement in person and by telephone. SMSs were used only as an additional means of communicating with the families.” 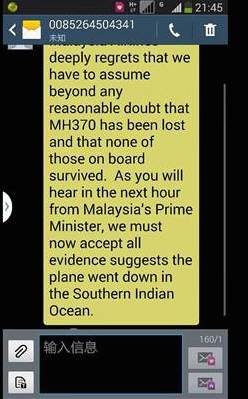 It was not a pretty scene at Lido Hotel, as ABC News reports:

The words “no survivors” triggered an explosion of grief and rage today in a Beijing hotel conference room filled with families of passengers aboard the Malaysia Airlines flight 370 who have been waiting 17 days for a sign their loved ones were alive.

Several women fainted and medics quickly attended to them, taking them away on stretchers.

Today, the anger spilled over into the streets as protesters gathered outside the Malaysian embassy at Liangmaqiao in Beijing. SCMP reports:

Nearly 100 relatives and their supporters marched on the Malaysian Embassy in Beijing, where they threw plastic water bottles, tried to rush the gate and chanted, “Liars!”

Many wore white T-shirts that read “Let’s pray for MH370” as they held banners and shouted, “Tell the truth! Return our relatives!”

Malcolm Moore of the Telegraph, who live-tweeted from the scene, reports that the protest lasted about two hours before buses arrived to take MH370 relatives away. It was officially sanctioned in that authorities closed down roads to allow the protesters to march to the Malaysian embassy. Other than some pushing and flinging of water bottles, there was no violence.

3-4 public buses, with police on board, are ferrying relatives to the Malaysia Embassy MH370

The relatives lost their temper & attacked police on the buses. They are now marching to the Malaysian embassy MH370

All the streets around the Malaysia embassy now closed off MH370 pic.twitter.com/Up8WOCdH6n

Meanwhile, Australian authorities temporarily called off searches for MH370 today due to storms. The Wall Street Journal reports that this episode has affected how Chinese travelers see Malaysia: 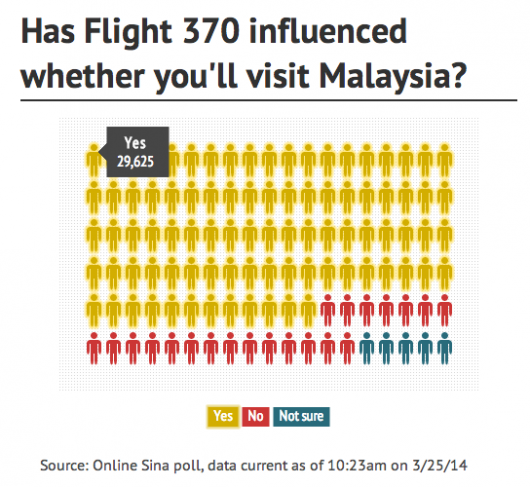 And finally, Malaysian papers were printed in black and white today in memory of MH370. Via Straits Times: 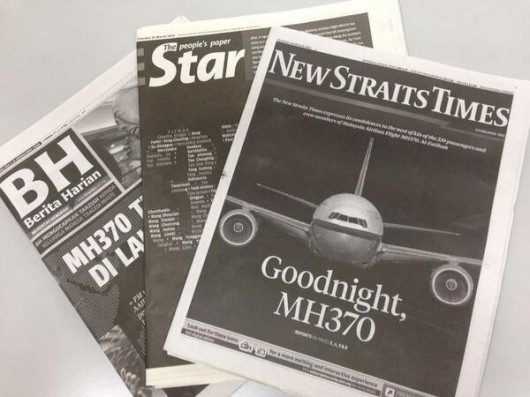 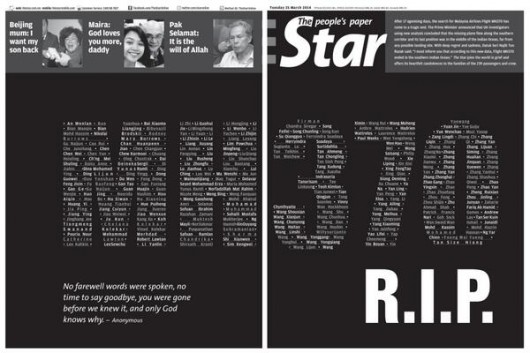 In fact, if it was closure Malaysian authorities were seeking, then the Australian defense minister expressed an entirely different position.

“Lets be clear — to this point in time we have not successfully recovered or identified any debris from the aircraft in question.”

Minister [David] Johnston told Xinhua at Pearce Airbase outside Perth that the fate of MH370 was still ‘a mystery.’

“And until we recover and positively identify a piece of debris — all is speculation,” he told Xinhua.

The earlier declaration by Malaysian authorities that it was now — somewhat illogically — “assumed beyond reasonable doubt,” that the Malaysian Airlines flight that left Kuala Lumpar for Beijing went down in the Southern Indian Ocean, has drawn strong criticism from both victims families and commentators.

Those words — ‘assumed beyond reasonable doubt’ — would appear to be ill-spoken and ill-timed.