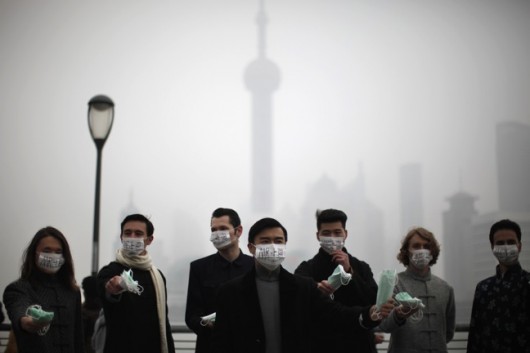 Starting Thursday, smog has shrouded Shanghai and nearby provinces, with PM2.5 readings shooting from 200 micrograms per cubic meter to as high as 700 at some air quality monitoring stations.

As of 1 pm Friday, the average PM2.5 reading in Shanghai reached an off-the-charts level of 602.5; the PM10 reading reached 671, with the highest reading recorded at 726 in Putuo district.

Not surprisingly, the frequently occurring smog has sparked outrage and debate among Chinese netizens. But in a country where ordinary people have no say in the administration of their nation, they’re limited to criticizing, mocking, and sighing on the Internet.

As a result, a new buzzword has gone viral: “Feed People Smog” (喂人民服雾), or Wei renmin fuwu. It’s a homophone for “Serve the People” (为人民服务), a political slogan introduced by Mao Zedong as a requirement for all government officials and party cadres.

“Feed people smog” first appeared in the comment section of an article and was subsequently reposted on news portals and social media. The comment reads:

A NetEase netizen from Shanghai: What the Japanese 731 army did not achieve has been all realized! Feed the people smog!

NetEase netizen 天一的天天下第一的一: A special scenery. Shanghai shall repackage and promote it and property prices will soon double.

A NetEase netizen from Shenzhen: Good phenomenon! Smog can enhance the immune system for Shanghai residents.