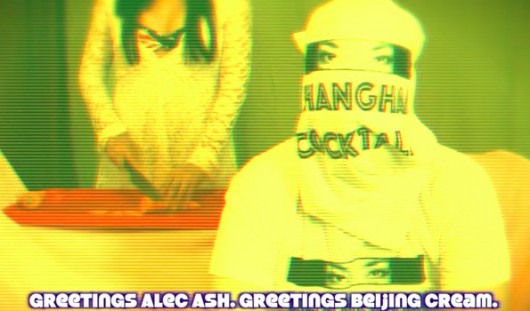 Before I saw Tom Olden’s video, I heard reactions to it. It was described as a “leap off the deep end” with an “ISIS vibe,” featuring a “headless girl in the background chopping carrots on an ironing board… PUA-style ‘burns’ on manhood, and, of course, that Jigsaw voice.” That’s crazy, I thought. Does the carrot represent neutered sexuality? Is the headless woman some self-aware avowal of misogyny? And what of the knife, that weapon-turned-tool of domesticity, scything away? Is the video menacing or ironic?

Then I watched, and… exactly. Yes.

In case you missed it, last week we published Alec Ash’s funny and incisive review of Olden’s memoir, Shanghai Cocktales, to precipitate this video. Ash’s review was not particularly positive, but it was humorous, had a killer ending, and it was an honest-by-God review — from a frequent contributor to The Los Angeles Review of Books, no less — so on the balance I expected Olden to have been happy.

Video on Tudou for those without VPNs

I keep picturing, for no particular reason, an incensed F. Scott Fitzgerald underneath a keffiyeh branded with block letters TRIMALCHIO IN WEST EGG telling the camera, Greetings, H.L. Mencken. Greetings, Chicago Tribune, and I think the world would have been a happier, more enlightened place had that happened.

“Perhaps the idea of cuckoldry excites you, no?” he offers.

“An Iranian man and I Chinese-finger-trapped a prostitute, for fuck’s sake!”

“Or do you in fact revel in cuckoldry?”

“Peter Hessler may not have a penis, but I do,” Fitzgerald — unable to know his penis would become a subject of fascination to Ernest Hemingway in the doomed author’s famous memoir — growls.

These are not the lines of a sane man. Said RFH, who edited Ash’s review, “I half-expected to see Alec tied to some elaborate Bateman-esque torture device at the end and being told he’s ‘going to play a game.’” But watch the video again, and pay attention to the progression of tone, notably from lighthearted to angry, and you’ll notice a half-rack of internal logic, I daresay order, a semblance of forethought. It begins with a concession (“Although we don’t see eye to eye, I see the humor in your writing”) and a self-deprecating joke (“You label my book’s title as a ‘shitty 2am pun.’ It was 3am when I decided on this title, Alec”) before the speaker becomes irritated, then irritating, defensive, and nearly angry (the Iranian-Chinese-finger-trapping line is spiked with ire, otherwise it could have been an uproarious punchline). Finally, in the latter stages, the message becomes muddled while sentences elongate like a bad hangover, as if Olden has been tricked yet again into a water-cooler homily with his subconscious, giving us, “I like to make educated choices. For instance, her breasts could be larger, but I’m still impressed with what she’s doing with this push-up bra, so I think I’ll give it a go.” In two minutes, Olden encapsulates 16 years of China life: cheer rotted into cynicism, resignation, and one long interminable howl at the unknowable realities which afflict our existence. Do you just fuck anything? Are you above sexuality?

Then let us never speak of it again.