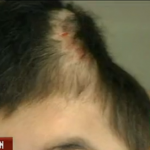 Found on Liveleak last night, this disturbing scene from a kindergarten in Guangzhou shows a 20-something female teacher lifting a four-year-old and throwing her onto the ground because she wouldn’t do her exercises. The child, Yao Yao, suffered a “major” head injury, according to the newscast. The teacher, apparently unaware that young children shouldn’t be... Read more » 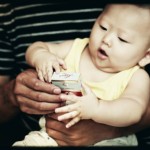 Please help us caption this image, screen-grabbed from BJC contributor Jim Fields’s latest video project, who notes: “One-third of the world’s smokers are Chinese men. The other two-third are Chinese babies.” The first part is true. 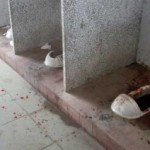 Southern Metropolis Daily has the story of a baby found in the squat toilet of a Dongguan shoe factory yesterday (that hurt to write). The picture you see above comes from The Nanfang, which tells us: Police immediately began an investigation to locate the child’s mother. Officers from Liaobu Hengkeng Police Station searched the factory’s... Read more »

In Taiyuan, Shanxi province on August 18, a 6-year-old boy called Wen Wen was playing in the parking lot outside his family’s fast-food restaurant when he was hit from behind by a minivan. But not hit, per se -- the van passed over him as he fell forward onto his knees and elbows and curled up into just the right size to avoid death. The vehicle continued to reverse... 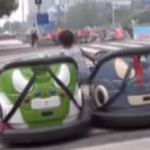 I'm not even going to try to explain this one. In Linyi, Shandong province, a kid was photographed crossing the road in a pair of bumper cars somehow (and for some reason) linked together. The kid straddles the connector in the middle and can accelerate, turn, and brake. It's all cute and funny until he gets run over by a car, amiright? 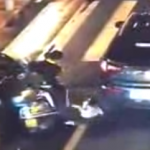 A woman nearly lost her child in Jinhua, Zhejiang province recently when she recklessly drove her scooter carrying two young children between two cars at a stoplight. As she braked, the scooter lurched and a child fell out, and at the same time the car next to them pulled forward as the light had turned green. The young child's head bumped against the back wheel of the car. The above video gives you a frightening idea of how close the child came to getting her head run over. 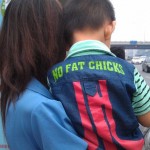 Via Imgur, at the Bawangfen South bus stop near Dawanglu in Beijing. Atari, yo. That’s the new old image of badass for the 2000s generation. What’s that, that’s not the Atari logo? Fuck it, I’m a pimp. Gonna go back to reading this now. (H/T Alicia) UPDATE: Picture by Natalie Litofsky! 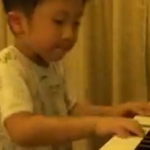 The website Godvine got itself a viral video recently, called "4 Year Old Boy Plays Piano Better Than Any Master - Wow," but left no information about it. Can you blame anyone for being a bit a skeptical? But this looks real to our eyes. Maybe the boy is actually older than four, but we'd just be nitpicking there. If he's playing even half those keys, I daresay he has a promising career in music in front of him. Alicia, who found this on Facebook, tells us that the father says at the very beginning in Cantonese, "Play it again..."

We’re not mean people who enjoy laughing at others’ misfortune, but if your head gets stuck between railings — concrete ones, requiring firefighters to be called in, with half a neighborhood watching — you deserve to be clucked at. Sorry, kid. But you live and learn, and life gets better. Easier? Probably not. But better.... Read more » 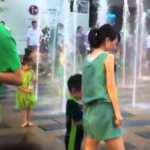 Hope you're enjoying your Saturday afternoon. If not, be inspired by these kids, found a few weeks ago in Sanlitun.