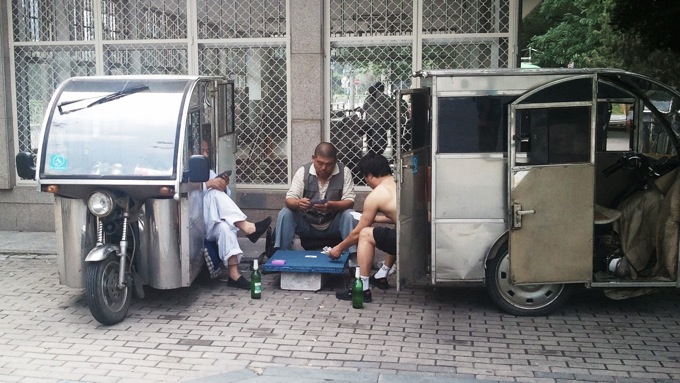 Every day, I bike past these three supernaturals on my way to work. They hold court over the southwest corner of Dongzhimen Bridge, existing in the shade north of Subway Exit D.

Every day, no matter where the sun happens to be in the sky, no matter what ad plays on the big screen above them, no matter what particulates are in our air, these three quietly sit, exchanging glances, incanting to some ancient, long-deceased ancestor, occasionally tossing offerings onto their portable altar. Bets are made, sums are counted, alcohol is imbibed according to the ritual of friendship. Outside of their immediate vicinity, time moves at a different speed.

In the concentric spheres outside their world, government caravans fly through intersections, cars crash, blood spatters, and lives unceremoniously conclude in mud huts and mountains, on the blade of knives or off rooftops or just because. Fortunes are made in large, reflective office buildings, bribes are received, deals are approved or rejected, skyscrapers are blueprinted and constructed in the space of a few months, and destroyed. Children are conceived, birthed, and educated in apartments and schools that look like tofu. Meanwhile, at the nexus of commerce and humanity, these three arbiters loiter. Cards are shuffled, bets are placed.

When I first saw them I was reminded of Van Gogh’s potato eaters because of the apparent simplicity of the scene. It seemed to be just old men playing cards, drinking beer. As time passed, these three began to burrow deeper into my conscience, transforming from human beings into something more symbolic.

They are not potato eaters. In fact, they’re much more like the gods in the universe of Shakespeare’s King Lear. As Gloucester laments, “As flies to wanton boys, are we to the gods, — They kill us for their sport.” Thus it is with these three immortals, killing us by ignoring our concerns over visas, traffic, personal glory. We fret and wander, while they bide their time.