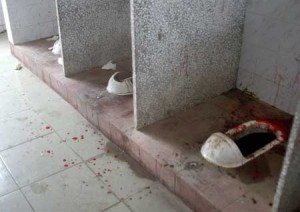 Southern Metropolis Daily has the story of a baby found in the squat toilet of a Dongguan shoe factory yesterday (that hurt to write). The picture you see above comes from The Nanfang, which tells us:

Police immediately began an investigation to locate the child’s mother. Officers from Liaobu Hengkeng Police Station searched the factory’s dormitories, asking whether any of the workers had been pregnant recently.

They were told that Chen Yuehua, a 15 year-old worker, had appeared pregnant and had spent a long time in the toilet that morning. When police located Chen, who comes from Guangxi Province, her skirt was covered in blood but she denied the allegations, claiming she had recently put on weight because she had eaten too much.

If there is a silver lining to any of this, it’s that the baby appears to be healthy and has been put up for adoption. It’s a good thing that newborns are, in the words of Liu Dong, head of the hospital’s emergency department, “too large to fully flush down.”

Now you’ll excuse me while I dump this half-eaten plate of food in front of me.