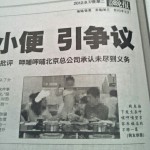 You’ve probably seen kids peeing and pooping in the streets of China — and you would turn a blind eye to it, I’m sure — but have you ever seen a boy peeing into a paper cup, held by his father, at a hotpot restaurant, over food, in front of all the other diners? At... Read more » 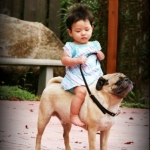 A bona fide work of art, this. Found by Alicia in Xinhua’s “Funny moments of those eccentric kids,” attributed to nen.com.cn. 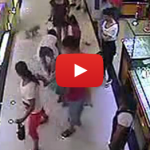 A few days ago at a shopping mall in Zunhua, Tangshan, Hebei province, security cameras caught a small dog being a small dog, by which I mean terrorizing a small child. The boy's grandmother tried to shoo the dog away (we don't know if she struck it, because that part is off-camera). This act infuriated the dog's owner, a young girl who began attacking the woman, who was in her 60s. Store attendants momentarily pulled the two apart, but the young girl continued to chase the grandmother, eventually throwing her onto the ground, where she remained for a long while before going to the hospital. 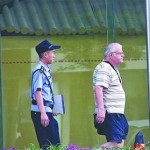 Sigh. A New Zealand national, believed in his 50s, tossed a 5-year-old Chinese girl into a swimming pool for “her bumping into him” in Jinan, capital city of E China’s Shandong province on July 1, the provincial newspaper Qilu Evening News reported. That’s from Sina English. Apparently the man (a university lecturer), when confronted by... Read more » 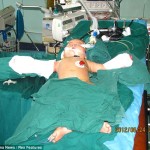 Not sure why this news story exists, existentially speaking, but earlier today, Shenzhen Media Group reported that on Saturday, a grandmother in Jinan, Shandong province cut off the hands of her eight-month-old granddaughter before trying to commit suicide (she survived). What does one do with a story like this? The Daily Mail picked it up... Read more » 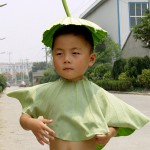 Alicia saw this on Global Times today, a picture by CFP captioned: “A boy shows his Apple haircut at West Lake in Hangzhou, East China’s Zhejiang Province on Saturday.” Must be nice to be that kid: didn’t do a thing, got into Global Times. But that’s how it is with toddlers, isn’t it? They usually... Read more » 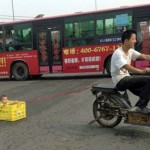 It’s easy for non-fathers to joke about what they’re going to do when they have kids, e.g., “When I’m a dad, I’m going to punt my kid around the house like he’s an Aussie football,” or, “I’m not going to spoil my kid, he’s going to sleep in a toolbox underneath the kitchen sink.” But... Read more »

Adults continue to be unable to resist doing noble things for young children in need. Danwei noted yesterday a story that made the front page of Today Morning News: on Monday evening, a man surnamed Liu heard the cries of a young boy outside. He then… …saw the boy dangling from a third-floor window of the... Read more » 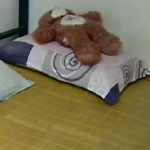 Jesus. It was only six hours ago that I wrote, regarding balcony railings, “When until — heavens forbid — a young child actually falls through?” At 2:41 pm today, China News posted a video from a Shenzhen TV station (embedded) reporting that yesterday, a three-year-old girl died after falling off a fourth-story balcony. According to... Read more »

It was only last Sunday that a kid in Guangdong province wandered onto his balcony and fell through a crack, and might have plummeted to serious injury if not for a Good Samaritan who climbed out of his window to help. Two days ago, the exact same thing appears to have happened in Guangxi province.... Read more »