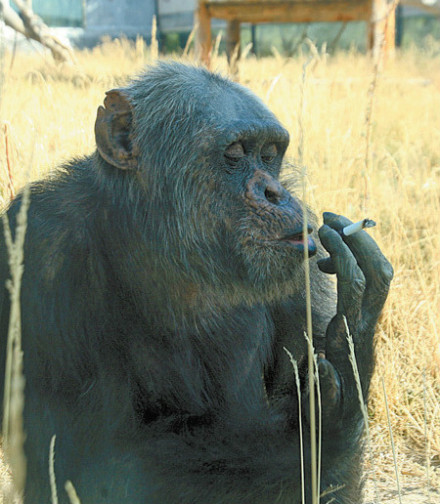 A 23-year-old gorilla named Jiaku became famous at Tianshan Wildlife Zoo in Xinjiang for being a “heavy smoker.” He was known to perform tricks — doing handstands, turning in circles, clapping his hands, even performing ballet moves – to get visitors to throw him a smoke, and would sometimes get desperate without his nicotine fix.

His trainer, however, out of concern for his health, has recently tried to wean him off cigarettes. The method has been to lace his ciggies with chili pepper and to apply an ointment on the end. So far it’s worked, according to the Sina Weibo account of Xinjiang Live.

But it’s not so simple. That same Weibo account has implored readers to “please stop giving him cigarettes,” since, you know, habits are hard to break. We don’t mean smoking habits: we mean the habit of being an asshole in Chinese zoos.

Imagine, as a recovering smoking addict, being taunted by hundreds of people every day who shout at you to “do that trick of yours” for a cigarette. Cancer almost seems merciful by comparison, doesn’t it?

One Response to “Jiaku The Gorilla Has Quit Smoking, So Please Stop Giving Him Cigarettes”