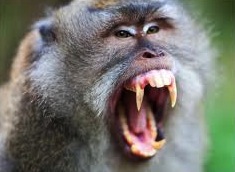 We’ve heard of a mother biting off her son’s penis, but a monkey on a child? Shanghai Daily has this weird and startling tale of the menacing monkey:

A monkey bit off an eight-month-old boy’s right testicle in a zoo in Guizhou Province yesterday and doctors said the damage was beyond repair, Shenzhen TV reported today.

The boy’s family condemned the indifference of the zoo management after the mishap and demanded compensation.

Trivial. Tell us more about the simian’s teeth of abandon.

A park official told the family that injuries from mon[k]ey attacks “are too common and happen all the time.”

But monkeys are so friendly and entertaining.

The monkey that broke loose from the cage and was playing with visitors suddenly attacked the boy when the mother was changing his diaper.

“It happened within seconds,” said the mother, crying and kneeling in a hospital, begging doctors to save her son.

“Please save him. He is too young to suffer all this,” the woman screamed and nearly collapsed.

The zoo will pay 10,000 to cover the boy’s medical bills. The family, presumably, is asking for more money.