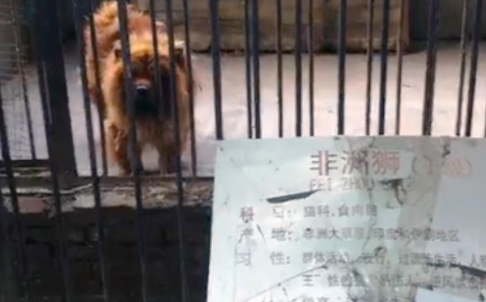 A zoo in Henan recently put a Tibetan mastiff in its lion pen, which had no lion.

We have no doubt they did this as a joke, perhaps to see which zoo-goers, followed by news outlets, would take them seriously. But we wonder — is this “trolling”? Is this “satire”? Is this actually a political statement about the Chinese zoo itself, forcing us — by caging a household pet — to see the metal bars which render animals as objects of amusement and belittlement?

In the zoo in Luohe in Henan , a cage marked “African lions” actually contained a Tibetan mastiff, a breed of domestic dog with fluffy brown fur around its face, according to photographs published by mainland media.

Zoo administrator, what say you? Surely this is part of a grand plan to…

A zoo administrator tried desperately to explain. “The wolves are there,” he told an Oriental Daily reporter.

“But the wolf is somewhere else in the pen and the dog is a pet. The African lions will be back. They went to another zoo to breed.”

Really, though, the dog is probably being treated better than lions. People tend to be assholes to exotic creatures.