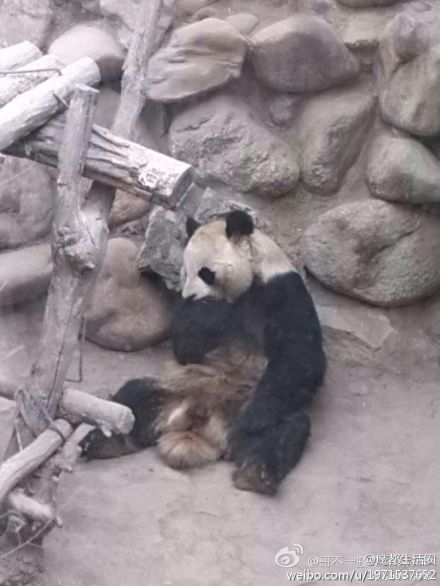 The Sina Weibo user who posted this picture, @哥不一搬3285043987, appears to have absonded from social media, but he/she thinks this giant panda in Lanzhou, Gansu province is dying because the zoo can’t feed it. The post:

Lanzhou City Zoo’s panda is the world’s saddest panda. Thin and dirty. So hungry it can’t even walk. Supervisors also will beat it. I beseech Lanzhou’s mayor, even though we’re Gansu poor, forget about saving face, don’t raise it if you can’t afford to, you can give it to a developed city in the south, America is okay too, I think they’ll treat the panda well. Begging everyone to save Lanzhou’s precious, Lanzhou’s young animal, begging everyone. If everyone agrees, please forward this Weibo!

It’s not that we don’t believe animals are mistreated at Chinese zoos. But starving a giant panda, the symbol of China? Would they really, even in Gansu?

But that panda does look like it’s a handgun away from shooting itself in the head.