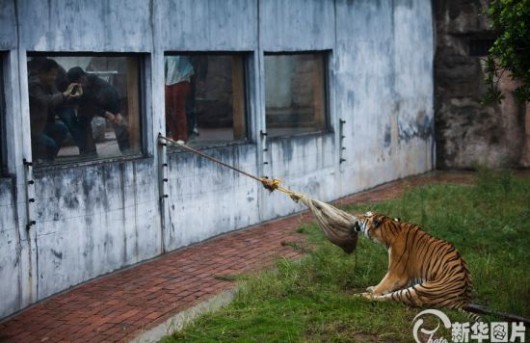 I’m no zoologist, but maybe tigers deserve a bit more dignity than tugging on a knapsack pulled by two-legged jackals?

Some netizens seem to agree. Via Shanghai Daily:

Many netizens thought the games between human beings and tigers are inappropriate. One netizen worried that a tooth of the tigers might be pulled out.

This is at Changsha Ecological Zoo in Changsha, Hunan province. A live chicken is in that sack. Tourists pay 45 yuan for the right to participate.

It is reported that in one such game, seven tourists lost to a four-year-old Amur tiger.

We’ve seen this before. Last October, a zoo in Wuhan pulled out the rope for tigers to tug against humans, prompting me to write, “Judging by the popularity of the spectacle, expect copycat schemes to pop up in zoos around the country.” What took so long?

The Changsha zoo’s public relations team has tried to spin the activity as being healthy for the tigers:

Yi Ting, a media staffer at the zoo, said yesterday that the tug-of-war game aims to train the wild Siberian tigers and stimulate them, avoiding sickness that could be caused by their long-term captivity in the zoo. Tourists who buy a ticket for 45 yuan (US$7.36) can participate in the game.

That’s incredible. Look at that quote again. A zoo that keeps animals in captivity long-term is admitting that its solution to preventing sickness caused by long-term zoo captivity is… tug-of-war.

No wonder sometimes zoo animals here sometimes look like this. 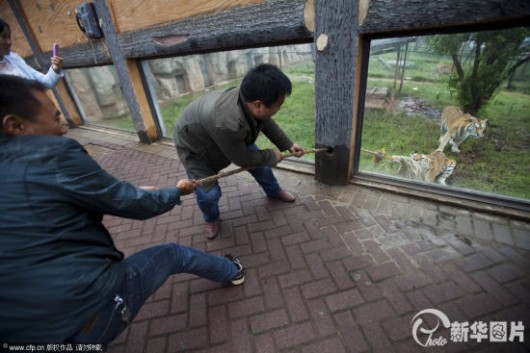 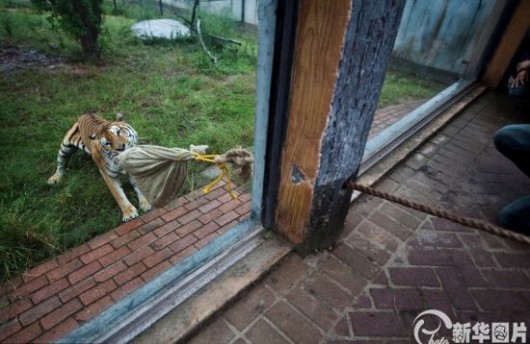