Whether dealing with common pets or endangered species, many humans still don’t know how to be humane. But public reaction to conditions at the Beijing Zoo and an incident at South China Normal University in Guangdong indicate that at least awareness is growing among animal advocates and netizens in this country.

A video of the poor living conditions of a polar bear at the Beijing Zoo, posted by Sina Weibo user @临临Lynn, elicited a flood of comments yesterday. The video (above) shows a bear slowly making its way across a barren, drained swimming pool littered with sheets of cracked and peeling paint.

According to Hexun, zoo officials explained that the paint is a waterproof fiberglass coating, and that significant temperature changes during the winter cause it to crack and peel from the concrete below. The zoo said it will take remedial measures, but netizens are still critical, saying the zoo shouldn’t wait until it hears complaints to fix such issues.

Other instances of mistreatment at zoos include hurling snowballs at lions, stoning crocodiles, and biting an ostrich to death. 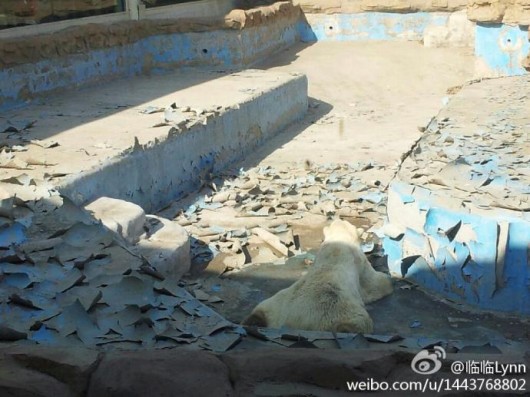 In other news, this shocking story from last month: security guards at South China Normal University were spotted dragging a stray dog across campus and beating it to death.

When questioned, guards justified their brutality by saying they were acting on orders from school administrators. This misguided attempt to reduce the stray dog population was an apparent response to dog bitings, though it’s unclear how many attacks there were.

Reporters interviewed a dog rescue advocate in Guangzhou, who claims that “most stray dogs around the school were abandoned by students upon graduation,” and that the problem can be solved by “increasing oversight of dorms and forbidding students from keeping dogs.”

The advocate believes that any dog attacks were most likely the result of instigation. “[Strays] will instinctually protect themselves if attacked, and most strays that were originally raised by humans hope people will help them.”