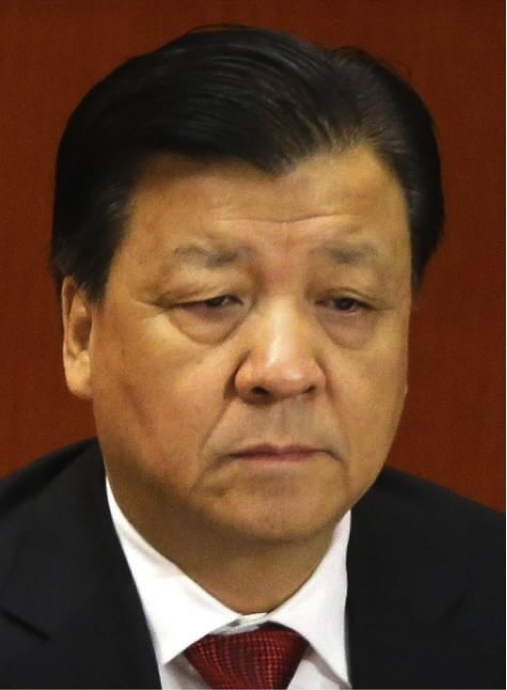 There’s the face. The next time your proxy breaks down and you have to deal with “Chinanet,” that’s the face you should think about. Look into those dead eyes and feel despair.

He has been acting as the head of the Propaganda department for quite some time now, usually appearing with his predecessor Li Changchun. What has he been doing? Well, nothing good.

As both Changchun’s (and Hu Jintao’s) lapdog, he has been a consummate supporter of censorship and China’s disastrous and often embarrassing soft power pushes. As far as traditional media goes, it’s in the iron fist of the CPC and will remain there until you reading this are long dead. As analysts say in SCMP, Liu operates “like a fireman” bursting in to “crack down on state media when it steps out of line.”

So, let’s take a look at where our newly-anointed Lord and Master of the Dark Arts stands on other issues.

Carolynne Wheeler at The Globe and Mail says, “Liu Yunshan… has presided over China’s draconian and ever-worsening censorship of the Internet.”

Liu doesn’t like the Internet. One of his favorite buzz-words for the past at least four years has been: Internet-related problems. He was also at the forefront of compulsory real-name registration on microblogging sites, not to mention the blocking of Twitter, Facebook, human rights websites and IMDB. His problem with the Internet comes in the form of “harmful information.”

As a general rule, when China blocks something like The New York Times or Facebook, they don’t make a big deal about it. Or any deal. They just pretend it didn’t happen and say it’s “in accordance with China’s laws,” which is true. Also, sad. The same information blackout goes for Liu Yunshan. But there is one instance when they pat themselves on the back pretty hard.

Liu also said in February of that same year, “Work priorities should be given to purifying the environment of Internet, Internet bars, screens, audios and campus surroundings.” Under this crackdown, ISPs were encouraged to hire special personnel to supervise “lewd content.”

As far as Liu is concerned, the Internet is something to be cleaned up. Or, as said in People’s Daily, “All departments concerned should fully cooperate and people from all sectors of society should be mobilized to create a positive social and cultural environment that is helpful to the healthy growth of minors.”

As a potential part of the “cultural rubbish,” I take offense.

Having overseen $8 billion (or 2.9 Wen Jiabao families) poured into China’s overseas soft power push, his greatest belief is that China’s soft power pushes are, in fact, a media force to be reckoned with and not some sort of sad joke that has gotten out of hand.

In that wheelhouse are the Confucius Institutes, harmless language/community centers with a Chinese propaganda pitbull guarding the door. Look forward to more of those.

Remember National Day? You know, that other time the Communist Party came to town and ruined Beijing? Well, in August of 2009, Liu Yunshan called on authorities at various levels of government to “step up patriotic education” and urged authorities to incorporate patriotic education into the daily life of the Chinese people, to “turn their love for the country into concrete actions.”

“Morals,” somehow, are a big deal for Liu. He, of course, is a massive fan of the fictional character Lei Feng, calling him, “our model forever.” You can’t swing a cat in People’s Daily without hitting an article of him rambling on about the importance of “socialist culture” and the morals thereof.

But this vague road leads down a path of obscenity by Party consensus. In May 2012, while attending a video conference on “the development on morality,” he stated they were launching a campaign “to improve moral awareness.” In order to do this Liu assured the silent reporters present that “China will continue to screen movies and music for immoral content and step up related regulations for the cultural market.”

He is a proponent of “more efforts to educate the public on the CPC’s glorious history, valuable experience, splendid achievements and hardworking spirit to strengthen people’s confidence to keep to the socialism road with Chinese characteristics.”

And he is a little brainwashed himself. In 2010, at the annual Asia Media Summit, he said: “The Chinese media has always followed a policy of being true to facts, to life, and to the people, besides (also) promoting innovation in news and communication concepts, content, formats and techniques.”

Yeah. So much for the meritocracy gimmick.

He’s red. Bloody red and pretty far right. In May of this year, just a few months before attaining his crown, Liu made a speech for the 70th anniversary of a celebrated Mao Zedong speech on art and literature, celebrated insofar as I’ve never heard it and that Mao had a famously, shall we say, turbulent relationship with writers and intellectuals in general.

He “urged the writers to study Mao’s speech, which called for putting people first, promoting national unity and harmony and going to the grassroots to find inspiration.”

He is also a big fan of “red tourism,” a lot, which I honestly still can’t believe is a thing.

He supports and publicizes CPC history pushes and fawns over communist theory and its popularization.

As a politician in China, he calls for, stresses and vows things a lot, all without making promises or sense. For example:

Those, believe it or not, are supposed to be news articles about Liu Yunshan.

It’s pretty difficult to find evidence of him being a prat, as he is the propaganda chief. People like that are pretty good at keeping things out of the news. The fact that the only coverage of him comes from the propaganda rags makes things worse.

As to political affiliations, his closest is Hu Jintao, with whom he has had a long and toadying relationship, but to give you a little inkling of his leanings, he was promoted at light speed in 1993 to vice-minister of the propaganda department, many believe, due to his association with Bo Yibo. Yeah, Bo Xilai’s daddy.

Apparently, he wasn’t always terrible. In SCMP’s “Elevation of Liu Yunshan heightens censorship fears,” Du Daozheng, a former senior editor at the Xinhua news agency and Liu’s boss in the 1970s when Liu was a reporter in Inner Mongolia, said Liu became conservative after entering the party’s propaganda department.

However, for all of his boisterous support for “socialist theory” and communism in general, it’s more of a preach than practice sort of scenario.

Yanshan’s son Liu Lefei was chairman of CITIC Private Equity Funds Management (current CEO) and was listed by Brookings Institution as one of the “25 most powerful business people in Asia.” The Beijing-based CITIC investment company is, surprise, a state investment company. Liu Lefei made the move to CEO in June 2012 and, as Asia Venture Capital Journal puts it, “It wouldn’t be the first time the child of a political figure has stepped back (on paper, at least) supposedly for the sake of the parent.”

So, there we are, the man in charge of your media, Internet and newspapers for the next decade. Sorry.