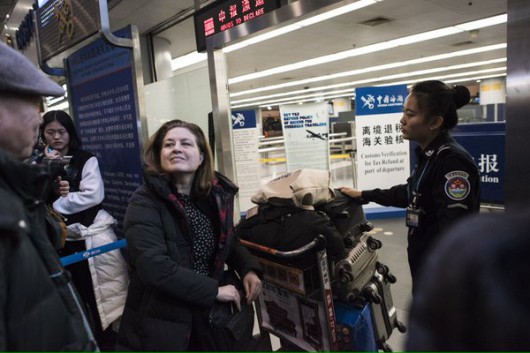 Ursula Gauthier, erstwhile Beijing correspondent for the French newsweekly L’Obs, left China for good in the early hours of January 1. It was not, as they say, of her own volition.

When the clock struck midnight on 2015, Gauthier’s press visa expired and was not up for renewal. According to official organs, she had offended the Chinese people with her November 18 article written in the aftermath of the November 13 terrorist attacks on Paris. Gauthier’s refusal to publicly apologize for remarks concerning China’s attempts to link Paris with its own problems in Xinjiang was taken as the final straw.

But her departure merely concluded a weeks-long saga of intimidation and mudslinging directed from the highest reaches of China’s propaganda and foreign affairs departments (a typical example here). In a statement, the Foreign Correspondents Club of China (FCCC) summarized the campaign against Gauthier, in which her photograph and address were published on a military forum, and expressed its unqualified disgust: “Insinuating that Ms. Gauthier supports terrorism is a particularly egregious personal and professional affront with no basis in fact.”

Indeed, on the basis of this (to say the least) unbecoming treatment of an accredited journalist, foreign correspondents have presented a united front, whatever they might have thought – and privately grumbled about – the substance of Gauthier’s piece. So let us be as similarly bold, so there’s no confusion: China’s official response to Ursula Gauthier’s piece in L’Obs is puerile, petty, and idiotic.

It can’t be said enough: expelling journalists for their work is not only a bad look – puerile, petty, idiotic, one might say – but terrible policy. As this excellent China Law and Policy blog post explains, Beijing has used the typically broad strokes of its Foreign Media Regulations to libel Gauthier as “championing terrorism,” offering a pathetic veneer of legality to its shit fit, and signaling a re-hardening of attitudes toward any who dare approach the invisible red lines of China reportage (ethnic policy, finances of the leadership, etc). It’s interesting to wonder whether Gauthier’s visa would have been affected if her article came out in June – six months before she needed an extension – as China renews all press credentials at the end of the calendar year; certainly, the timing benefitted her critics. Still, if Gauthier’s expulsion was meant to be a warning, it’s not likely it’ll rattle journalists worth their salt: within days of the announcement came a New York Times report entitled “Xinjiang Seethes Under Chinese Crackdown.”

But nor is any journalist willing to ask serious questions of Gauthier’s reporting, for fear of validating the response. Unfortunately, this code of silence – though broken quite frankly in private – is not only sketchy ethics (“We always report fairly and objectively – unless it’s one of us”), it’s a gift to Chinese propagandists who prefer their critics to be a homogenous, hostile mass – “Western media” – than an independent and wholly diverse group of earnest scrutineers.

Gauthier’s article – her English translation can be found here, via China Digital Times – was fatally flawed in one way: she failed to differentiate between terrorism – defined as the violent targeting of innocent civilians for political purposes – and Terrorism™, the post-9/11 brand, which is an empty shell of counterproductive rhetoric.

China wanting in on Terrorism’s™ endless war should not surprise anybody, because that “war” – for all its ceaseless costs and stupidity – is a stirring political success. Of course China’s ruthlessly savvy and shrewd politicians would like to be a recognized component of a globally legitimized campaign against Extremism. And naturally, when a journalist calls them out, they call her a hypocrite, kick her out of the country, and create a poll that asks, “Do you support expelling the China-based French journalist who championed terrorism,” then relish in the fact that 94% of respondents said yes. The War on Terror™ in the United States, by the way, has led to discrimination, censorship, lunacy, nationally televised bigotry, forfeited civil liberties, increased militarism, violence, and a real war that cost trillions and radicalized countless. But who cares, right? TERRORISM.™

In attacking China’s rhetoric on Terror™, Gauthier could have done herself a service by pointing out that this rhetoric is US-born and incredibly dumb. It’s not about using different yardsticks for China vs. “The West” – those yardsticks all suck. How is China’s War on Terror™ different than any other country’s? It’s not – it’s equally pathetic.

But Gauthier’s other, bigger mistake was the following passage, which – and many reporters, even those who vehemently support Gauthier’s cause, will admit this – veers too far from any factual basis to be considered good journalism:

But, bloody though it was, the Baicheng attack had nothing in common with the 13th November attacks. In fact it was an explosion of local rage such as have blown up more and more often in this distant province whose inhabitants, turcophone and Muslim Uyghurs, face pitiless repression. Pushed to the limit, a small group of Uyghurs armed with cleavers set upon a coal mine and its Han Chinese workers, probably in revenge for an abuse, an injustice or an expropriation.

“Probably in revenge for an abuse, an injustice or an expropriation” is a sentence that will flunk you out of Journalism 101. (And how could these coal miners, among the most disenfranchised and vulnerable group of workers in China, possibly have it coming?) Even if this was a magazine column, where there’s room for occasional editorializing, the speculation probably outreaches the research. Ignoring this simply reinforces the “Us and Them” dynamic so beloved of state media’s criticism of the “Western media.”

China is unlikely to win the sort of cooperation from the US and Europe that it garnered after September 11th. Given the smothering control over Chinese society and territory that the authorities enjoy, it is equally unlikely that Islamic State jihadists will link up with infuriated Xinjiang residents. But so long as the Uyghurs’ situation continues to get worse, China’s magnificent mega-cities will be vulnerable to the risk of machete attacks.

Seen in light of the Baicheng attacks – in which scores of coal miners were knifed to death – the phrase “China’s magnificent mega-cities will be vulnerable to the risk of machete attacks” reads as tone-deaf, and dangerously close to the sentiment, Maybe they deserved it. (Gauthier doesn’t say those words, and maybe she would never try to imply it, but it’s a sentiment that some people hold, and that disembodied sentiment lurks in the context of what Gauthier did write.) For the record, there’s a way to say “repression can radicalize the marginalized” without sounding callous.

Should Gauthier have been expelled for publishing this? Absolutely not. Xinjiang is a place of swirling ethnic tension, where many Uyghurs have legitimate fears of “being labeled ‘a terrorist,’” as BJC columnist Beige Wind wrote last month. But the issue is with the label itself, and the War on Terror.™

China is not the first – and won’t be the last – country to politicize a tragedy. (They certainly could have picked a better time than post-Paris to point at their own terrorism problem, particularly a massacre they were more than happy to suppress at the time.) Then again, they didn’t come up with the original terms for the War on Terror™, and seem to have only the faintest understanding of what it entails. Blame them roundly for expelling Gauthier, yes. But let’s remember that they’re merely parroting a flawed rhetoric, one that a significant number of leaders probably don’t believe themselves, except for the political benefits that they deem theirs to share.

2 Responses to “Ursula Gauthier Wrote A Bad Article, And In China That’s A Crime”