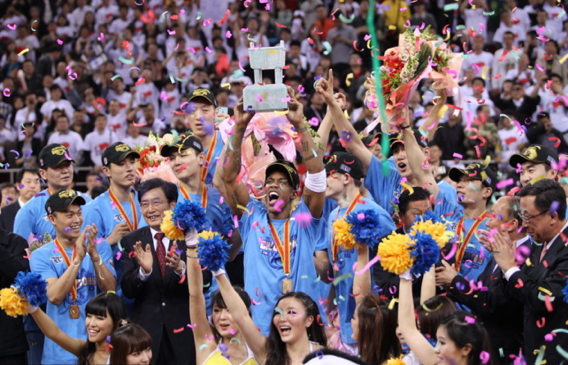 They kept trying to jinx it, I swear to God they did. Before tonight’s game, the club gave away t-shirts (white, per Stephon Marbury’s suggestion) that read, “March 30, 2012: Beijing Ducks are champions.”

With 21.9 seconds left, Beijing up two and Guangdong set to inbound, the crowd chanted, “Championship! Championship!”

With 6.1 seconds — still 6.1 seconds left — after Beijing’s Chen Lei secured a rebound off an Aaron Brooks miss and got fouled, a BTV announcer shouted, “Beijing has won!”

Heck, forget all that. Before this series, Beijing’s seldom-used Chang Lin told a BTV reporter — with all the naiveté of a rookie just happy to get camera time — that he thought the Ducks would win the series 4 games to 1.

So here we were, 6 seconds remaining and Chen Lei, the 12-year veteran and captain of the team, stepping to the line with a chance to ice the game. It seemed fitting. Except — given how much the Ducks had goaded the basketball fates — it was much more fitting that Chen would miss his first free throw, leaving Guangdong the chance to deliver a dagger.

Brooks brought the ball over the mid-court line and passed to James Singleton, who lined up an awfully good shot at a game-tying three…

There’s no need for the suspenseful ellipses, of course. You already know Beijing won. The ball clanked off the back iron. Yet the ellipses are symbolic, because at every step of this series, one was never convinced — until the very end — that the Ducks were able to pull this out. And that’s what made this such a riveting series. Because as the overwhelming underdogs making its first finals appearance, playing a team in its 10th straight finals, each Beijing win seemed more incredible than the last.

Let’s recap. In Game 1, Beijing was coming off a tough series that went to the wire, while Guangdong — winners of the last four championships — had not lost a game in either of its first two series. Toward the end of the game, as Guangdong made a frenzied comeback attempt to cut a 23-point fourth-quarter deficit (with 10 minutes left) to five (with 5:30 left), and then to four with a minute to go, Beijing coach Min Lulei looked like he might hyperventilate.

If the Game 1 win was exhilarating, Game 2′s victory at Guangdong was an absolute shocker, in which the Souther Tigers’ sharpshooters kept missing late open looks to let Beijing escape 109-106. And then the Ducks get blown out in Game 3 and everyone’s wondering: has the heavyweight shaken off the rust, found its killer instinct? Game 4, like Game 1, felt like a must-win for the Ducks. They had to defend their home court.

Fast-forward to the fourth quarter of Game 5 tonight. Guangdong, down 1 after three quarters, suddenly catches fire. At one point, the Southern Tigers score on five consecutive trips down the court, with a Brooks three-pointer giving them a 109-101 lead with 7:49 left, forcing Beijing to call timeout. The Ducks’ bench looks deflated. Guangdong maintains its eight-point deficit for another minute, go up 113-105.

And that’s when Beijing begins to claw back. The lead gets cut to 113-109 with just under six minutes to go, and coming out of a timeout, Marbury signals for the crowd to make more noise. The 18,000 in attendance respond. A minute later, Randolph Morris gets an emphatic rejection, and the Ducks’ spark plug of a guard, the diminutive Lee Hsueh-lin, nails a three on the other end to tie the game at 114. Wukesong erupts. Marbury assists on a layup the next time down to give Beijing a two-point lead and suddenly the championship is right there. It’s 116-114 with a little more than four minutes to play.

The champs get off the mat, though, and eventually the game is tied in the last 90 seconds, ball in Brooks’ hands. He puts an expert move on Marbury, their arms get tangled, and the ref whistles Marbury for his sixth foul. Those in the crowd not too stunned to see their hero trudge toward the bench would chant MVP, but troubling reality was that Beijing would be without its best player for the last minute-21 of a game knotted at 121.

Had Marbury already done enough, with 41 points, 7 assists, 3 rebounds and 2 steals? His teammates put on their defensive stand of the season, ending in a block at the rim. After Guangdong’s 12-year veteran Zhu Fangyu is whistled for a blocking foul, Randolph Morris sinks two free throws — catching a lot of rim both times — to put the Ducks up two with 21.9 seconds.

Cameras followed the players and coaches into the locker room, where at least three people wept with the bright nimbus of camera lights in their eyes. It was chaotic and exuberant, and wholly good, enough to make one forget all the controversy that preceded this moment.

They retook the court. The trophy came out, which looked like it was made out of jade, while Queen’s “We Are the Champions” played. They took a team picture, the duck mascot scampering down to the front row. Eventually the trophy ended up in Marbury’s hands and his alone. He kissed it while the last of the confetti fluttered to the floor.

When the madness died down, the fans beginning to take their leave, a BTV reporter found Chen Lei and asked him about his 12-year career and all the tribulation he had endured.

Beijing is currently the capital of Chinese professional basketball: the WCBA champion resides here as well.

5 Responses to “In Beijing, The New Champion Of Chinese Basketball”