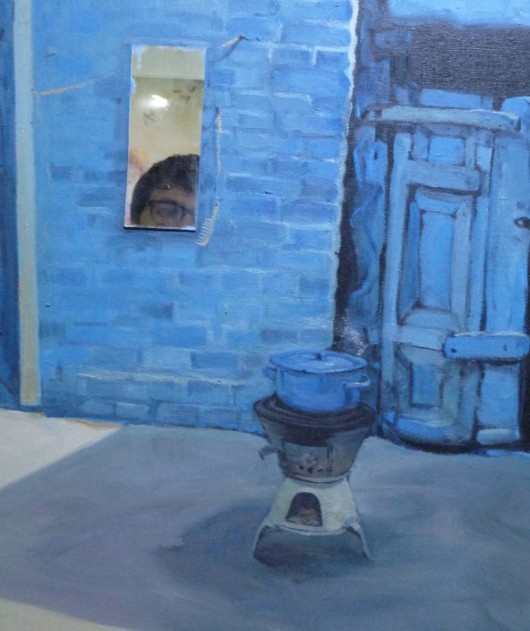 A good while ago the anthropologist Stevan Harrell asked me to consider the unique position of Uyghurs as heirs to an urbanism that predates the rise of Chinese cities in the region. He asked me to think through the ways in which this urban tradition has affected Uyghur social organization. I’m still thinking about this.

Uyghur thinkers are too. They are thinking about the way new urban forms reorient their lives. They are grappling with the way certain spaces draw them in by reflecting their pasts while other forms face them with a blankness that does not allow them a way in.

One of the most remarkable paintings at the first Uyghur contemporary art art exhibition in 2015 was a mixed media piece in which the artist Yarmemet Niyaz inserted a small rectangular mirror onto the side of a bright blue house next to an old coal stove (Uy: mesh) that many people use in Uyghur oasis cities. The mirror interpellates the viewer. You can literally see yourself in the painting. As you do this you imagine yourself in that place, or, for many Uyghur viewers, you imagine yourself in that past: standing in front of a mirror combing your hair with a comb that hangs on a string before walking out into the bazaar.

Uyghur urbanism is still with us. For some it exists in memory; for many it exists in the ways spaces are used. In three of Tahir Hamut’s poems, which we recently translated and published in the US-based literary journal Banango Street, we see the way a young man settles into a place like the city of Ürümchi. We see how over time he gradually comes to terms with approaching middle age. We see the way he comes to know the parameters of his life.

Like a city, life seduces. The beauty of its ugliness makes Tahir care for it. The filth of the streets, the pollution in the air, the bitterness of the cold, the blankness of the walls and the apathy of strangers, all of these elements coalesce as a strange machine. Through familiarity with its estrangement, it comes to feel like a place where making a life is possible. The jumble of Uyghur urbanism, dusty streets, calls to kebab and to prayer are still there, but the future is opening up to a concrete world of “stubborn streets, angry cars, glaring lamps, immoral roads, lonely trash, beautiful dungeons, naked concrete.” This is Tahir Hamut’s Ürümchi.

Here are excerpts from poems about the city by Tahir Hamut: 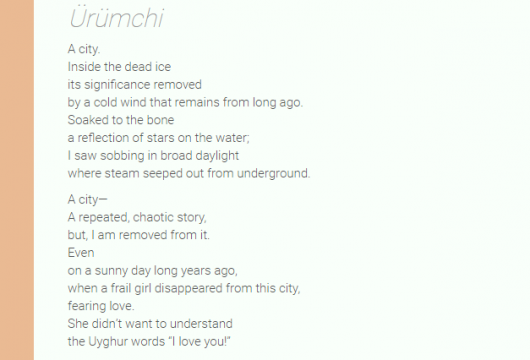 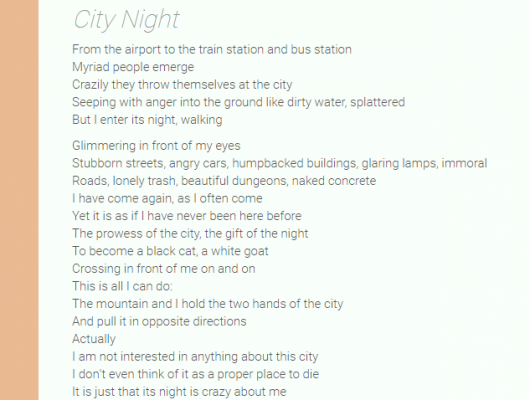 The latest issue of Banango Street is not the only place where Tahir’s work has appeared. Joshua L. Freeman, a doctoral student at Harvard University, has also translated and published his work in Gulf Coast, Crazyhorse, The Berkeley Poetry Review and Words Without Borders. Many of these stunning poems from the 1990s and early 2000s are focused on Tahir’s attachments to the places he came from – Kashgar and the dusty, time-worn traditions of Southern Xinjiang. They take us out of spaces of capitalist development into the deep time of Uyghur worlds. The poems I’ve chosen to highlight here are more pedestrian. They make us think about the present condition of the Uyghur every day. But they still make us wonder, how does the past live in the present?

Beige Wind is Darren Byler, an academic in Seattle. He will be posting under his real name on his website The Art of Life in Chinese Central Asia, which attempts to recognize and create dialogue around the ways minority people create a durable existence, and, in turn, how these voices from the margins implicate all of us in simultaneously distinctive and connected ways.