[Disclaimer: BJC editor Anthony Tao is an organizer of the Beijing Bookworm Literary Festival and was not involved in writing this post. We'll continue to keep things impartial, freewheeling, and, yes, indolent in our coverage at the Cream] 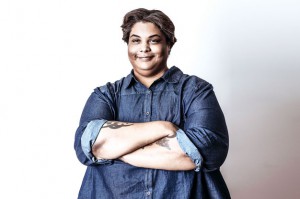 Author Roxane Gay, whose books include Bad Feminist and the novel An Untamed State

Roxane was scheduled for a solo talk today, talking about gender activism and her recent novel, as well as a forum on March 15 addressing race, gender, identity, and cultural marginality. The latter, though, will proceed as planned (The Bookworm is refunding all ticket holders for the Sunday talk, and offering the same deal for anyone not wishing to attend Tuesday’s panel).

Last week, Roxane had tweeted concerns about how she might be received in China

Also, theoretically I am going to China in 6 days. I keep hearing horror stories of how fat people are treated there.

So I am in a constant state of panic and dread about the trip.

Although… being “plus size” in China is an aspiration to many.* Subjects that might be considered taboo or tricky elsewhere – education, salary, medical history, career prospects, home ownership, whether you’re interested in investing in a third cousin’s startup – are sometimes used as ice-breakers in the PRC.

“Hi, good to meet you – are you married? Why not? Did you attend Harvard? OK, see you later” is a conversation we’ve all had, or overheard, or had a few times (by the way, if you’re ever in a desperately awkward social situation: mention that you don’t “get why people have kids, ever,” suggest all property is really theft, or boast about the cartel of Japanese nationalists you befriended last week in a Mongolian nightclub. Problem. Solved).

Big picture, though – times are tough for women. Last year, five were detained by police for handing out leaflets discussing sexual harassment – they were only released after an international media backlash. Those same women have since been sharply warned to keep their mouths shut while Beijing hosted the annual political meeting this month. Meanwhile, officials celebrated last week’s International Women’s Day with an… ethnic fashion show. And just yesterday, before the Bookworm Literary Festival’s morning event called Women’s Rights Around the World, this happened to Beijing LGBT center executive director Ying Xin (a.k.a. Xiao Tie):

An empty seat for Xiao Tie, who was intercepted by cops on her way to her event this morn at The Bookworm #BLF2016 pic.twitter.com/g6WSf5MiHy

To be clear: not detained, just not allowed to participate in event Women's Rights Around the World with Bidisha, Clare Wright, Lijia Zhang

* OK, mainly men. Many men. There’s definitely a tranche of Chinese fellows who’d argue Jabba the Hutt is a jovial wealth creator, simply a KTV-loving slug who makes his own rules. When Jabs is then cruelly betrayed by Princess Leia in Jedi, the lesson becomes ever-clear: Never the trust a woman you’ve kidnapped and sexually demeaned. Right?!? These men should be avoided at all costs, but can be swiftly identified by their pompadour hairstyles, loose polo-and-slacks combo and insistence that you get blind-drunk with them at midday.