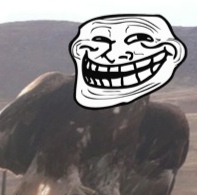 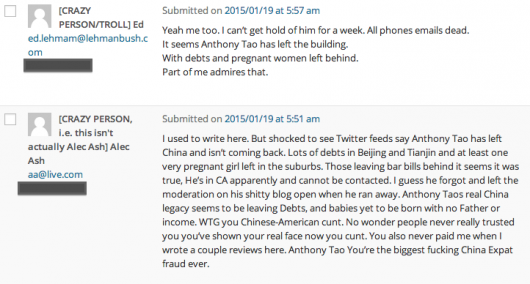 Whoever this individual was, he’s expended more time and energy on this site in the last few weeks than Tao, me or any of our usual writers. Like an unpaid intern who’ll do anything just to be noticed, this guy went the distance – and more. He deserves Recognition. Respect. In language he’d understand, “Rogering.”

But what do we really know about him?

1) He thinks the true measure of a chap is whether he buys his round. You can pour bile on other religions, lie about yourself and spew homophobia, but God help you if you don’t settle your bar tab – you’ve crossed a line, mister!

2) He’s on conversational terms with the Black Sun Bar management. Although its ownership has changed over the years, and the Black Sun is hardly anyone’s idea of a destination spot these days.

3) He also seems to think the Hidden Tree, which closed in 2005, is still a thing. So, someone whose Beijing heyday was a decade ago, perhaps.

4) He reckons Alexa is something people use: 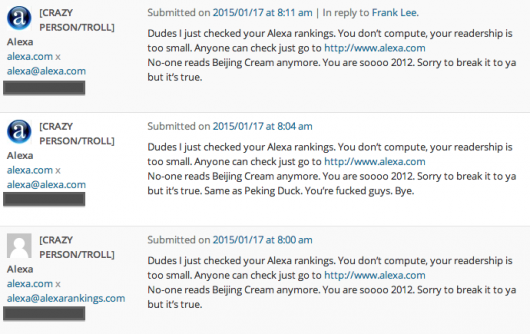 5) It’s not just race hate – he’s embraced sexism and homophobia to make the full trifecta. Oh dammit, I missed one: he has a beef with the trans community, too.

6) We’re looking for a schoolboy wit who might reference “used tampons” or “smegma” when deep in his cups. See above.

7) Master of Sock Puppets: Whoever he is, this guy makes Johann Hari look like Sooty. Not only does he set up multiple accounts offering a chorus line of criticism and/or praise, he likes to fend off detractors by impersonating them to write – yes – vile abuse. (See below link.)

8) He’s a staunch defender of Shaun Rein and Chris Devonshire-Ellis.

9) He knows a surprising amount about Chris Devonshire-Ellis. And the bar/nightclub Maggie’s.

10) He’s a stern critic of the Peking Duck blog, China Law Blog, Ryan McLaughlin of Lost Laowai blog and pretty much anyone who’s ever written about Chris Devonshire-Ellis.

Who could it be?

15 Responses to “Help Us Find Beijing Cream’s No. 1 Troll”