Shanghaiist has the story, as does the Beijinger. But damn it all if we’re letting a sex mushroom get through the day without ribbing it here.

On June 17, Xi’an Up Close《西安零距离》aired a story about a “mushroom” that was found in Liucunbu village in Shaanxi province. The reporter, Ye Yunfeng, says at one point: “We can see here that this thing looks a lot like a fungus, with a mushroom head on both sides; at the top, we can see, there’s a mouth-like shape, and on the other side, there’s a small hole that opens through [to the other side]. It feels very lustrous smooth, and fleshy. We measured it with a ruler: this thing is about 19 centimeters or so.”

Uh huh. And you still think it’s a mushroom?

“I’ve done my own research on the internet,” says the afore-mentioned villager. “It’s a type of lingzhi mushroom, called the taisui.” [Editor's note: Taisui refers to 60 celestial generals named in the Chinese zodiac.]

Without skipping a beat, reporter Ye chimes in with her own research, saying this type of lingzhi is generally found in the Shaanxi region deep underground and is hence rarely seen. “When the Emperor Qin Shi Huang was on the hunt for the secret to longevity,” she elucidates, “it is said he discovered this lingzhi was the answer.”

The Beijinger adds that Weibo commenters have been having a field day with this episode, as they well should. “Who threw that in the well? The whole village is ashamed now,” says one. “How pure are the reporter and the cameraman!” says another.

The TV station, for its part, has handled this very well. It wrote on its Weibo:

“An open letter to all netizens and viewers: Hi everyone, one of our news reports which aired last night has made everyone laugh. This incident has been widely followed, shared and commented on. As our reporter was still very young and unwise to the ways of the world, this report has brought great inconvenience to everyone. We’d like to take this opportunity to thank everyone from the bottom of our hearts for your criticism and correction. Please forgive our oversight!”

There’s nothing to forgive, Xi’an Up Close. We eagerly await your next report about the all-male sauna and relaxation clubs of the Terracotta Warriors. 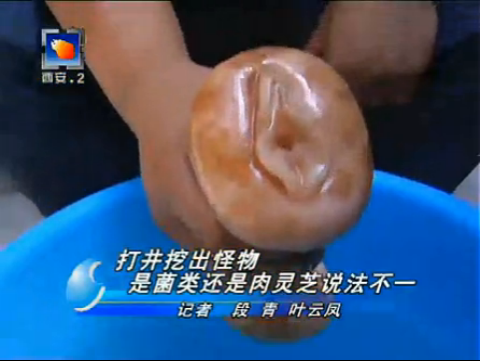 12 Responses to “Chinese News Team Reports On Rare Lingzhi Mushroom, Which Is Actually A Rubber Vagina”