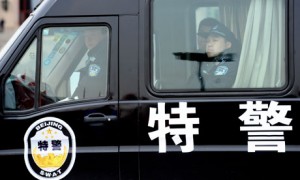 China Daily Show is the only news source visible from outer space. This is a CDS-BJC joint production.

My beloved pet cat went missing while I was out walking it in the park last week. Afterwards, I spotted one of my neighbours wearing a bracelet exactly like the diamond-studded collar my little Fang Fang used to wear. When I queried it, however, she smiled and invited me to discuss the matter over a special hotpot. Should I go?

– I Thought I Saw a Pussy Cat

I recently went down to the Avenue of Eternal Peace with some monks and released several hundred snakes and doves. I was even wearing a a T-shirt with the words “One-party rule is a disaster” in prominent characters. In no time at all, several cops turned up and ask me where I bought the shirt. I told them it’s from a 1946 Communist Party newspaper! They all laughed and told me bring a dozen down to the station for their friends.

Could you help my friends and I settle a debate? I’m convinced Hong Kong is a Semi-Autonomous Zone but she is certain it is a Special Administrative Region. My other mate suggests that it doesn’t matter, that Hong Kong is an incontrovertible part of China and we should both just shut the fuck up. Who do you think is right?

Have you checked out my counterrevolutionary pornography? It is very yellow, very offensive. You can find it at [redacted]. Close blue pop-up windows and scrolling down halfway, look for the link called “Great Deep Forward.” Please ignore a red pop-up: that is prostitute “spam,” nothing to do with me: that will mess up your hard drive, believe me. Very difficult to get rid of. OK, so I recommend the video with Mao in a donkey suit, reading (in truth, it’s not the real Mao. It is an artist friend of mine, wearing a grey suit and fake mole: very convincing!). Pay special attention to the book in his hand. That’s right: it’s the banned Ming Dynasty classic The Plum in the Golden Vase! Today, I see my local police station is following this on Weibo. I wait for the knock at my door. Instead, they re-tweet.

I recently pulled some strings to get an editorial piece published in a major US newspaper. It was extolling the virtues of working in China and I duly sucked on the panda’s teat till my lips cracked. A few months on, I now realize what an embarrassingly naive greenhorn I must have appeared writing it.  I’m now telling everyone that it was, in fact, intended as a satirical piece and the editors utterly missed the point. Do you think this will wash?

I’m not really sure this has anything to do with the real issue at hand. Namely, my efforts to raise awareness of the recent government white paper Social Taxes in Anhui Province. This is an issue that has been scandalously neglected in the West, You can read all about my efforts to resist the state’s plan to raise taxes on rural farmers by three percent in exchange for “social benefits” at my personal blog, sxuysncine.net. Click through the sidebar underneath the ad for kitchen knives. I have some devastating things to say about the local taxation bureau and, judging from my hit rates, it’s clear the powers that be are doing everything they can to prevent people from viewing this incendiary material.

Having problems? Need to talk to an expert? Send your questions to cds@chinadailyshow.com. Follow this and other authentic China voices @chinadailyshow.