Wang Kang, a self-described do-it-yourself expert, is somewhat of an Iron Man enthusiast, and by “somewhat” I mean he’s a much bigger enthusiast than you, and just about bigger than anyone else. How am I almost certain of this? Because in the above video, he parades around a Beijing office building in a fully powered Iron Man exoskeleton, complete with a functioning light that represents Tony Stark’s nuclear heart. Wang made the suit with friends. I really wish he’d have smashed a minivan’s windshield to take his work to the next level, but the nonviolent parading will have to do. (There’s another great video after the jump in which Iron Man boogies to Chinese music in an apartment.)

The vid first appeared on Youku (embedded after the jump for those in China) 10 months ago and garnered 645,000 views (including 738 dislikes; Youku viewers are a tough crowd). It just made it onto YouTube on March 30, and we’re posting it now because of the news released today that Iron Man 3 will be co-produced in China:

In the journo business, that’s called a news hook. But really, no reason should be necessary for wanting to share this (note the cat): 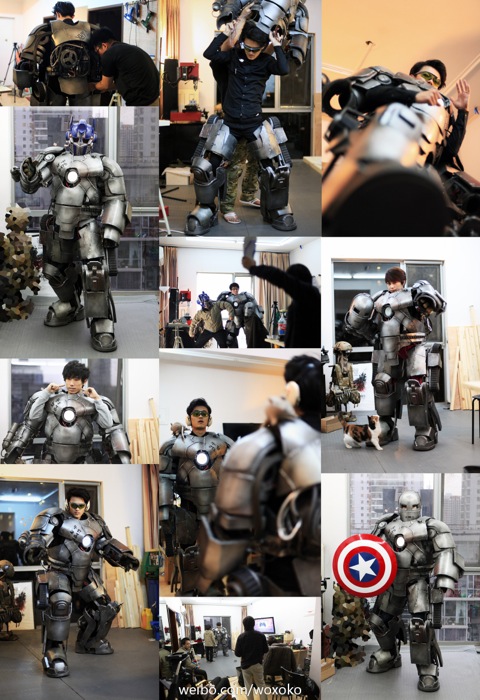 One Response to “Real-Life Iron Man In Beijing (The Next Movie Is Coming To China, Too)”