A lot of things happened this week, from the Tiananmen anniversary to the death of dissidents to Tibetans setting themselves on fire. Predictably, the Chinese papers stayed away from these subjects entirely. What did they focus on instead? The Shanghai Cooperation Organization.

I’m pretty sure at least one of those countries is made up. One of them begins with eight consonants. The amount of points you can get at Scrabble with them is higher than their GDP, which is terrible because you can’t use proper nouns in Scrabble.

Here is what the representatives looked like at the recent summit in Beijing: 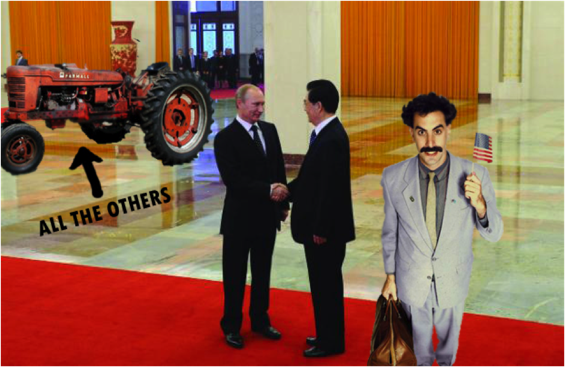 I don’t mean to take the piss out of those countries, but c’mon; the SCO is like a bad-ass gang of bingo hall squatters. There are other observer states, but these are the main guys.

Despite the fact that the Shanghai Cooperation Organization sounds like an NGO for the mentally disabled, it is apparently, at least to China, a big deal.

1. China and Russia are awesome.

The editorials all say the same things: “SCO is great,” “Hearken to the word of the SCO,” “All praise be unto the SCO.” But there was one that was, “THE SCO IS NOT NATO, STUPID COLD WAR-MINDED WESTERNERS! HA! YOU ARE SILLY FOREIGN DEVILS!” (A Global Times piece, as you might imagine). Other editorials more gracefully broached this topic, all centering around the assumption that China is something entirely new, shat forth from the harmonious womb of a resplendent golden and auspicious socialist vagina, making it entirely unfit for foreigners to comment upon.

But they’re right on one front: it isn’t NATO.

Then again, no one accused them of being NATO.

The party-line rags went on, at great length, mind you, about how the evil, evil, evil Western media had accused them of being a counterbalance to NATO. But the only “Western media” articles that implied this before the Chinese editorials were this, in the Hindustan Times, this, in the Russia and India Report, and this, in the Indian Express, largely because of India’s “observer” role in the organization with a view to taking a more active part.

So why did the propaganda rags publish editorials about this? I — haven’t a fucking clue.

What we have here is China having an argument… that it started… with itself.

The Global Times said this: “The Western media is full of comments about the SCO’s confrontation with the US and NATO. It was even called an eastern NATO by some media. This reflects a Cold War mentality and narrow-mindedness.” 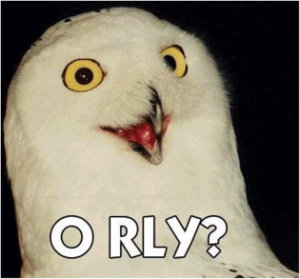 That’s right. I had to use an owl to express my incredulity. Not a word of that lead was even close to being correct. Exactly how narrow-minded were they when the US offered to join as an “observer” in 2006? This week, they accepted Afghanistan as an observer. Afghanistan. THAT is a snub, which will undoubtedly be followed by, well, this sort of banality. Obviously, it is an area-specific organization, and the US shouldn’t have really expected to have a seat. But they even let the President of Iran, Mahmoud AhMcCrazyPants, be an observer and make a speech where he said crazy things like a crazy man. He’s crazy.

Now that the summit is over, there are a few foreign policy geeks (the worst kind of geeks) pontificating about how the two should seek an active role with each other, and, since then, a few articles about the militarization of the SCO have reared their heads, largely citing the Chinese editorial insistence as evidence. It’s more of an isn’t-this-interesting kinda thing, rather than a cower-and-run-because-the-Chinamen-are-coming kinda thing.

The articles that can be found, now and back in the day, don’t exactly equate the SCO to a “counterbalance to NATO,” but rather a “counterbalance to the international ideals of democratic governance.” They may have a point there. Basically, if you’re an authoritarian dictator, you’ve got a friend in China.

Most of the actual members are part of the “Supposedly-a-Democracy Bowling Team,” and each have their own individual and varied troubles. But when you go off and google their human rights violations, just Ctrl+F for “intimidation” and “cruelty.” Also, most of them show up as pretty grim colors on the Reporters Without Boarders map of press freedoms.

The organization, when not discussing relatively impressive investment techniques, is pretty much only concerned with their own sovereignty and safety. As Xinhua said, “Despite the remarkable achievements attained by the SCO, the region still faces grim challenges from ‘the three evil forces’ of terrorism, extremism and separatism.”

All of those things sound bad until you realize that “extremism” means human rights and free press, that “separatism” means Taiwan and Tibet, and that “terrorism” means protestors.

I don’t think people should just arbitrarily make up “three evil forces,” especially ones that aren’t that scary. I say the three evil forces are lung cancer, flesh-eating robots and wasps.

As such, the SCO issued a statement saying that they were against “interventionism.” Well, they would be, wouldn’t they? There are a whole lot of under-informed people in their country that want to kick their ass, but they suffer from the birth defect of not being born with a tank. This has been an ongoing theme in Chinese newspapers for a while. They tell the world that it’s morally reprehensible to stand up to authoritarian governments, and then they taunt the world. It’s a fun little game. And by fun little game, I mean frustrating merry-go-round of goading fuckery.

Or, as said in one “news” piece from China’s Vice Foreign Minister, vying for most passive-aggressive statement of the year: “We strongly oppose some countries intervene in other countries’ internal affairs.”

We know, sweetie. Now go and play in the garden for awhile.

Mainly, it’s a meeting where everyone can talk about how great the meeting is:

The most annoying thing about this editorial onslaught is that it and other hackneyed subjects displaced the Tiananmen massacre. I was looking forward to the editorials calmly explaining how there is too much political fundamentalism and how the Western media are liars and opportunists working for a robot Ronald Reagan, but they weren’t there. China is a country that talks endlessly about the anniversary of every little thing in lieu of proper media organizations. They celebrate Nixon’s visit, for christ’s sake! Global Times ran not one, but two politically motivated editorials on Nixon’s visit back in February. Why on earth would they celebrate the arrival of an antagonistic, thieving, conspiratorial, paranoid – oh, wait. I see it now.

But they can’t be bothered to write at least a passing word regarding the time that hundreds were massacred near the Muxidi subway station, a time when nine people in Shanghai were run over by a stampeding train trying to make it through protestors’ barricades, when students in Wuhan poured gasoline on a moving train but were stopped right before they lit the match, when people in Nanjing took over bus stations, railway stations and highways. 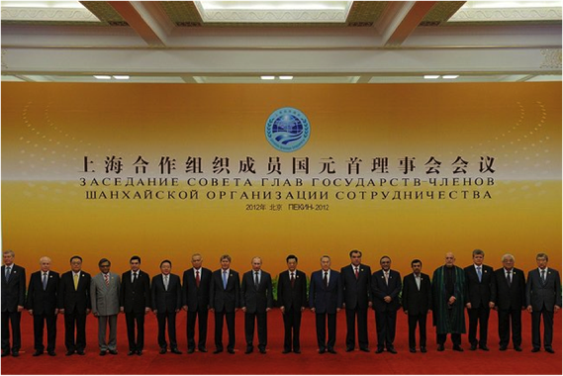 Which, in just six short years, evolved from this: 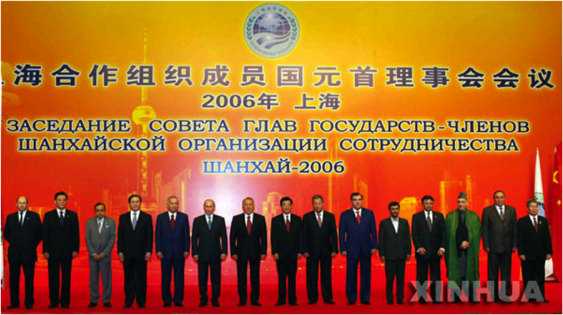 That’s right. Back in 2006, these guys were so bad ass that they didn’t even cast shadows. Not only have most of the leaders of these countries not changed, but some of them are still wearing the same suits. Others continue to look like characters from The Sims, albeit less photoshopped.

We’ll finish up on the SCO with a quote from our favorite newspaper editor, Hu Xijin at Global Times:

Everything appears to be a challenge in the eyes of American elites who are showing a hegemonic fragility… Perhaps the idea of old-style big powers clashing throughout history is so deeply ingrained that any concept other than that of inevitable conflict is heterodoxy to them.

That’s it for now. Other items this week included: Taiwan definitely being part of China, China and Russia being the bestest friends ever, gaokao boobery, blaming the Western media for the Houla massacre, yet more banging on about the human rights report, how ancient Chinese socialist recipe can cure EU’s debt problem, China’s rise is rising to rise risiness of China’s rise rising and air.