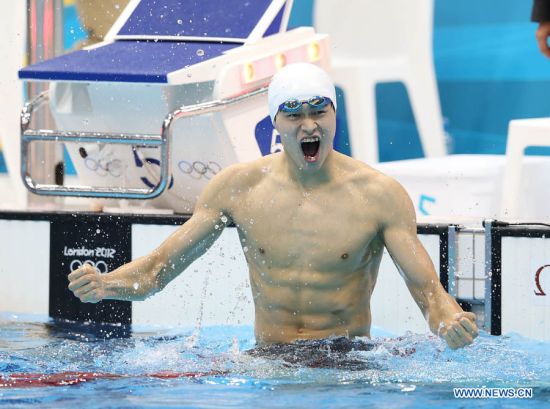 Sun Yang made history last night by becoming the first Chinese man to win an Olympic swimming event, beating defending champion (and favorite) Park Tae Hwan of South Korea in the 400-meter freestyle and setting a new Olympic record of 3:40:14 (video here). After the race, he straddled a lane buoy and let out a primal scream as the CCTV announcer called him a “Chinese manly man.”

The win was nearly marred with controversy, as Park almost didn’t compete in the finals due to a judge’s decision. According to Sina:

Park was initially disqualified by a judge on the pool deck for a false start in the morning heats, after which South Korean media accused so-called referee conspiracy by a Chinese judge. However, it turned out to be a rumor as no Chinese judge was involved in the event. Later, Park was reinstated in the final after the FINA Jury of Appeal examined the protest lodged by the Korean Swimming Federation and made the decision based on the recommendation of the FINA Technical Swimming Commission.

After the race, Sun dedicated this win to his coach, who is apparently in bad health, and then had this to say to the South Koreans, as translated by Sina:

“I have swum my personal best time and I want to use this swim to tell the South Koreans something. I want to show that we are good swimmers and we do not need to do anything other than swim in order to win.”

Those are manly-man words.

Park, for his part, didn’t blame the judge’s decision in the morning for causing his bad run.

“I tried my best in the race. I don’t want to say that what happened with having been disqualified was bad for my performance, but it was,” he said.

He was gracious to Sun though, sort of:

“I lost the race, but I am glad that it was an Asian who won. It is something we can all be proud of,” Park said.