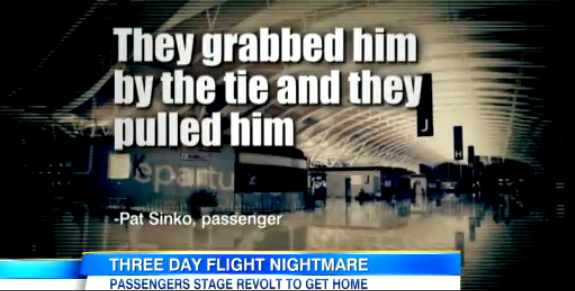 AP was first on the story on Friday:

The passengers were supposed to leave on Wednesday for Newark, N.J. The airline says the Boeing 777 had a mechanical problem so the flight was canceled. The plane was not fixed in time to fly them out on Thursday.

United spokesman Rahsaan Johnson said the plane was fixed by Friday, but a boarding issue delayed the flight. That meant that the crew did not have enough time to make the flight under federal safety rules. So that flight was canceled, too.

Eventually, more details began trickling in, and in case you were wondering: no, passengers did not patiently let an airline jerk them around for three days. According to Stephen Stirling of the New Jersey Star-Ledger in a story published Sunday:

Imagine the scene: Frustrated, desperate passengers stranded in Shanghai take matters into their own hands, shouting down airline officials and ultimately forming a blockade to get onto a Newark-bound plane intended for others.

A mere 48 hours earlier, the mutinous travelers had been law-abiding and courteous, decent people who would have been appalled at the thought of usurping other passengers and taking their plane. But that was then. Now they just wanted out of China.

Good Morning America has since done its own piece, with video (I can’t seem to embed, unfortunately). “It could be the worst delay in memory,” says reporter Jim Avila. Apparently there was also a fistfight:

The flight was canceled twice because of maintenance on the Boeing 777, and a third delay came because the flight crew had been on duty too long. Passengers say they couldn’t get to their luggage, some of which was unceremoniously dumped off carousels, leading to fist fights.

“They [airport officials] grabbed him by the tie, and they pulled him physically across the counter and started slapping him,” said passenger Pat Sinko, describing what happened to another passenger.

The nightmare began, passengers say, after the first cancellation because of maintenance. The airline put all the passengers up in hotels. Thursday arrived, and so did a second setback: The replacement generator, which has to be shipped from the U.S., didn’t make it to China in time. On Friday, United Flight 87 passengers were promised they would leave, even if travelers on another flight had to be bumped.

That’s when the pilot of the flight told the passengers the original plane had been fixed and was located at another gate. One Chinese passenger refused to go to the other gate and organized a mini revolt to block newly arriving passengers from getting on the plane.

This is, as experienced air travelers in China know full well, not the first time passengers have staged a “revolt” in a Chinese airport. In that very city in April, in fact, frustrated passengers rushed onto the tarmac when their flight wouldn’t take off.

The only difference this time is that it was an American airline that couldn’t get off the ground. Just goes to show that some things really do cut across cultural lines, for better or worse. Horribly worse, in this case.