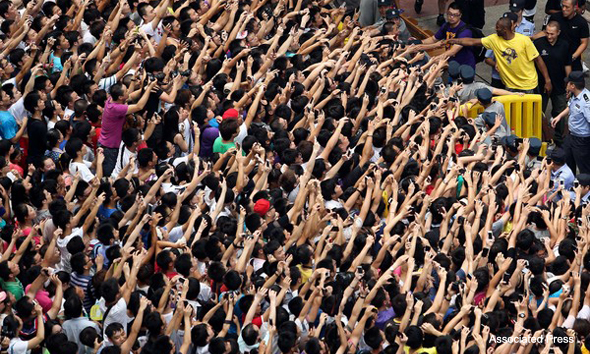 Via The Basketball Jones

First, the picture, taken on Thursday in Wuhan as part of Kobe Bryant’s annual Nike tour: it is ridiculous. Reports the LA Times:

This is the seventh summer in a row that Bryant has visited China, including the 2008 Beijing Olympics. On this trip, according to published accounts, Bryant has hosted training clinics at Jinan in China’s Shandong province and in Wuhan in Hubei province. Bryant attended a charity dinner hosted by the China Soong Ching Ling Foundation, which raises educational funds for needy children in both China and the United States. And it’s also safe to presume he’ll participate in various events promoting his Nike sneakers.

Continuing the absurdity: we knew a video of Kobe on the basketball court would surface sooner than later, and we were not disappointed. After the jump, check out the highlights of Kobe scoring 68 points in 15 minutes over the weekend in Shanghai (brought to our attention by Deadspin). It wasn’t, ahem, exactly the standard basketball game though.

The game, played in two 15-minute halves, featured local pop music stars. Bryant, in China on a promotional tour, sat out the entire first half before scoring a self-reported 68 points to key his team to a comeback victory, after fans somehow texted in to give his opponents an extra 20-point lead. Yes, you read that paragraph correctly.

Did we mention pop stars? The game was sponsored by Sprite, so fellow Sprite sponsor Jay Chou was there (remember, he and Kobe have made commercials together). So of course Kobe had to get on an electric guitar:

Again via CBS Sports, here’s what Kobe wrote on his Facebook page about the game itself:

We played two 15 min halves with a running clock. I watched from the bench for the first half. We were trailing by 9 when I was notified that fans via text can choose a team to add 20 additional points to their tally!!! We were now down 29!! I wanted to play it cool but what the heck, the place was packed with fans who’d sang an early happy birthday to me and really wanted to watch me go to work. My teammates were down. They are all singers/actors and do not play ball much AT ALL, but they are very successful at what they do hence they are VERY competitive. They asked if I could bring them back in the second half..

I didn’t want to disappoint them or the fans that had paid their hard earned money for a show so I took the challenge of really using the second half as a training session for my stamina. I ran and ran and ran. I wound up scoring 68 in the 2nd and we won. Like I said, they are not basketball players by any stretch of the imagination. I was just having fun with all of them and loved hearing the crowd enjoy the show we put on.

Over at Deadspin, there’s a video of a dramatic free-throw-cum-half-court-shot contest, along with other weirdness. Considering how the crowd lapped it all up, we suspect Kobe’s new shoe should sell just fine.

“Highlights” of the 68-point game:


Interview with Nike rep in Wuhan — you’ll have to forgive the annoying one-man “Kobe” chant at the beginning: