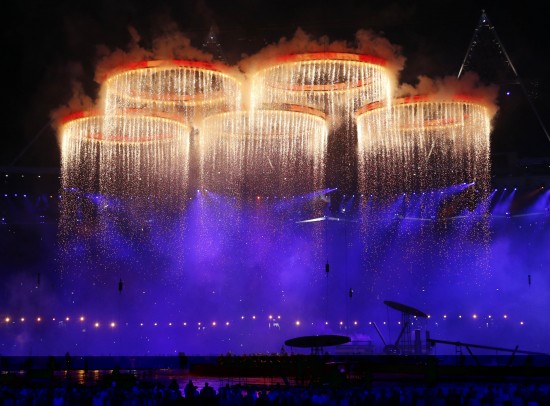 There was something approaching unabashed joy at Danny Boyle’s opening ceremony for London 2012. Partly because it was a creative way to render the best of Britain on stage, partly because the soundtrack was great, but mostly because it stood up to the incredible spectacle of Beijing. After the handover at the closing ceremony in 2008, which featured David Beckham kicking a football and some aging rocker squeezing out guitar wank, most Brits assumed LOCOG would be better off not trying. Course, we also assumed we’d be out of the recession by now, too.

Both ceremonies are available online (London / Beijing), and both are worth watching, because they are massively expensive efforts aiming to inspire you to see the best of the host country. The authorities in democracies and autocracies alike use these spectaculars to highlight particular national narratives; pride in the military, historical contributions to the world and indigenous culture always feature.

First, Danny Boyle’s extravaganza. It really was a great blend of poignancy, camp and fun, demonstrating not only pride in national strengths, but the values of inclusiveness and humor. Disabled people and a broad variety of ethnicities played prominent roles. A bit with Rowan Atkinson got the biggest laugh, but even the Queen chipped in with a bit of fun.

The Hobbiton scenes were peaceful, warm renditions of an imagined bucolic English past. (Not unlike the “real” Hobbiton, from that fantastically racist epic LOTR.)

Then the former might of British industry was celebrated, replete with pollution and population displacement, as the country scenes were dramatically dismantled and replaced by smokestacks and darkness. (Take heart, Beijingers! The idea of “Foggy London” was just a euphemism for an era when Britain’s capital was choked by burning coal.)

The Olympic rings were forged in fire, then spectacularly brought together in a shower of sparks, referencing Britain’s contribution to modernity and thus the Olympics themselves.

In an apparent last-minute fuck-you to the visiting Mitt Romney, there was also a celebration of the National Health Service, with sick kids being treated by nurses and then freaked out by English children’s lit villains, such as Captain Hook and Voldemort. Mary Poppinses swooped in and saved them.

David Beckham proved to be handsome and very good at smirking handsomely while handsomely driving a speedboat down the river handsome.

The torch lighting was creatively democratic, forward-looking and hopeful. The torch itself is the most original iteration we’ve ever seen at any games, rightfully called “a triumph” by the BBC.

The broadcast commentators were clearly positive about everything, unlike the media that surrounded Beijing’s opening ceremony. Perhaps inevitably, NBC took the opportunity four years ago to blend redundancy and racism with the assumption that the audience is stupid and doesn’t mind tape delay. (Oh wait, that’s not so different from this year.) For example, when a dancer was held aloft by dozens of others, they explained that “great accomplishments, great individual accomplishments, particularly in this society, rely on much more than the individual alone.”

Right. Not like us individual Westerners who do things all alone.

The drummers who opened the show were “a little intimidating,” so had been “told to smile more and that’s taken some of the edge off it.”

One wonders if the drummers had been Chads, Brads and Jasons if they would have been called intimidating.

Remember the fuss over the “faked fireworks”? Zhang Yimo included a firework display in the shape of giant footprints, stretching across the city, moving from Tiananmen Square to the National Stadium. A helicopter camera shot they wanted to use was deemed unsafe, so it was replaced with a computer generated version, spliced in for TV viewers at the exact time as the real fireworks were being detonated. Merely the shot was simulated, though several news sources gave the impression that the whole display was fake. Meanwhile, some of the shots of Beckham on the HMS Handsome couldn’t have been taken without some prerecording. Also, someone helped him drive. This was called “a clever trick.” Hmm.

Another issue in 2008 was the lip synching child performer, who sang “Hymn to My Country.” The original singer was replaced at the last minute by a slightly cuter girl, who mimed the performance. Western media erupted over the issue. Both girls were used to highlight the fundamental illegitimacy, untrustworthiness and unfairness of the host country, where the individual is unimportant.

But I have my suspicions about London’s fakery. I’m pretty sure there were no black industrialists in 18th-century Britain. I strongly suspect that not all the sick kids in the NHS scene were really sick. And I also suspect that Paul McCartney’s face is fake. (And that he is a hack. I wish the good Beatles were still alive.)

Perhaps an article from Slate in 2008 drew the clearest duality between Western Freedom/Chinese Repression. Titled “Bring on The Bitchy Brits,” the writer drooled over herself pointing out how critical the British media are:

Thank you, Britain, for giving the world the gift of nasty, negative, snarky journalism, along with the culture of free speech that sustains it. In fact, there isn’t the slightest chance that the London Olympics will resemble the Beijing Olympics: not in choreography, not in pyrotechnics, not in quantities of identically dressed, super-coordinated dancers – and not in suppression of political dissidents, either.

Calling the 2008 Olympics a “triumph for authoritarianism” (while failing to note that Britain has 20% of the world’s closed-circuit television cameras with only 1% of the population and the most draconian terror-related detention laws of any democracy), the author continues:

In the run-up to the 2012 Olympics, Londoners will complain about the traffic; politicians will carp about the cost; critics will call the ceremonies tasteless… but there won’t be arrests or police intimidation; there won’t be forced expropriation of property; there won’t be stony-faced acrobats marching in formation – and in the end, the whole thing will be a lot less sinister, a lot less damaging, and a lot more fun.

Perhaps the author couldn’t imagine the fun of missiles on apartments and 12,000 troops compensating for the failures of the Thatcherite privatization fetish. Smoothly passing over an array of Orientalist ideas, the conclusion is that, whatever else, Westerners know how to have more fun than the Chinese.

Well, I was here for 2008, and it was the most fun two weeks of my life. I have friends in London right now having a great time. Guess what? The Olympics are fun. Chinese people are fun individuals. So are “we.” The real conclusion?

Andray Abrahamian is a researcher of Korean affairs who lives in Beijing.