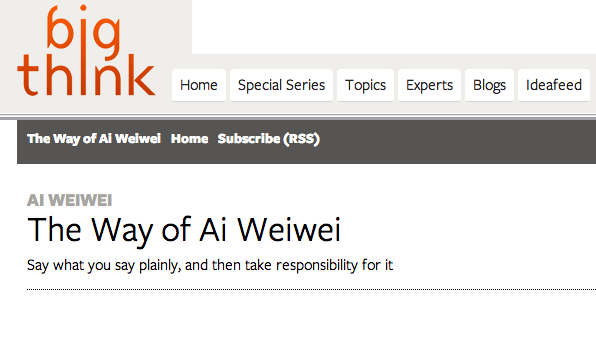 Hosted by Big Think, The Way of Ai Weiwei is Ai Weiwei’s first blog since the government shut down his previous one in 2009. From the “About” section:

The first blog by the most important contemporary artist in the world, Ai Weiwei, since Chinese authorities shut down his original blog and twitter feed in 2009, prior to his arrest and nearly three months of detention and psychological torture. It will feature original content by the artist himself, including in-depth video interviews shot in his Beijing studio.

We at Big Think are passionate believers in Ai Weiwei’s ongoing campaign for human rights and freedom of speech. We applaud his heroic efforts in investigating the government coverup of the 2008 Sichuan earthquake that killed over 80,000 people, including thousands of schoolchildren. And we’re proud to provide him a platform to continue these efforts on a global scale.

There are no posts yet. But Big Think did recently post an interview with the artist in August about “the Internet,” which you can watch in the below link.

(H/T Asia Society) UPDATE, 11/15, 12:56 am: Ai Weiwei has never written any content on “his” blog on Big Think, and it seems unlikely he ever will. A few days back, I emailed Big Think to ask why they haven’t removed this blog yet, considering Ai Weiwei has shown absolutely no intention of using it. We’ve yet to receive a reply.