The South China Sea is pretty boring to most people, normal people. But China’s reaction to politics in the region is priceless, a full-on charm/punching offensive in Southeast Asia.

The Association of Southeast Asian Nations held a summit last week, during which we learned China has territorial disputes with, well, just about every member with a coastline.

To make the situation just a little less clear, here’s a map to help you out. 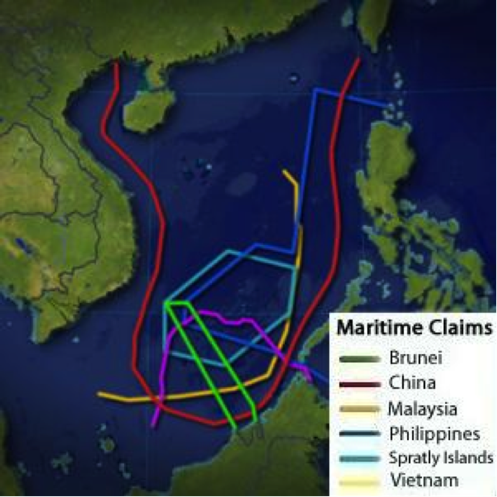 Yes, apparently in “ancient times,” the Chinese people decided that they owned a flaccid penis-shaped silhouette of real estate in the South China Sea. Actually, it’s pretty much the whole thing.

The real problem, the real problem, is America, according to the Chinese papers, and as you might expect, the US took quite the beating. To make sure the ASEAN played ball, China went on an all-out propaganda war with Southeast Asia on three major fronts.

For those of you keeping score at home, regardless of whether China should or should not be a democracy, there is no denying that the propaganda rags hate the very concept. This, coupled with the CPC, pretty much makes China’s media the single greatest enemy of democracy on the planet.

So, when the reelected Obama landed in Myanmar on his flying laser motorcycle of freshly-reelected badass, you can bet China wasn’t very supportive.

There was “US and Myanmar eyeing possible romance” in Global Times:

(The US) has been weighing whether it should set promoting democracy in Myanmar as the top priority or seek its own geopolitical strategic interests…Obama’s Myanmar visit highlights the selective use of democracy and human rights issues.

There was “What’s the intention of Obama’s visit to Asia” in People’s Daily:

Under the disguise of democracy, human rights and freedom, Obama tried to develop new partnership to expand the US presence and influence in Southeast Asia in Myanmar.

Democracy, human rights and freedom? The brigands. And from the same piece:

The Obama administration is playing trick in the “rebalance” strategy. But, Man proposes, God disposes. The “God” refers to the regional and global trends. Those who bow before it survive and those who resist perish.

But the most comprehensive attack came in the form of Ding Gang, the People’s Daily stooge. The Global Times liked his editorial so much, they published it three times in a row on their website, not that anyone but me would notice.

It also made the “Top News” section. Cause China insulting democracy and the US is what passes for “news” at the Global Times.

Ding Gang is one of the worst, down in the ranks of Hu Xijin and Shan Renping, though he’s perhaps even worse because he lives and works for People’s Daily in Bangkok, which greatly reduces the chances that one day I will be able run into him, over and over, with my head and fists. Mainly, he’s a tool, party-line vagina through and through.

Here are some gems from “US democracy no solution for ethnic issues”:

There is a sense of urgency in Obama’s emphasis of US democracy’s effects. US influence has actually declined to a level that makes him nervous… Even ordinary people can see this. [...]

US presidents can’t speak modestly about US democracy, nor can they see it as peculiar to the US. [...]

During his latest trip in Thailand, he made a similar statement, “It’s worked for us for over 200 years now, and I think it’s going to work for Thailand and it’s going to work for this entire region. And the alternative, I think, is a false hope that, over time, I think erodes and collapses under the weight of people whose aspirations are not being met.” …But in reality, there are no panaceas. Obama’s declaration sounded like former US president George W. Bush’s anti-terrorism declaration a decade ago that you were either “with us or against us.”

The gist of his editorial is that democracy won’t automatically solve issues to do with civil rights or, as Ding calls it, “ethnic integration.” This is true. He points out that democracies favor the majority, leaving out the minorities who don’t get with the program. Assuming that Ding Gang is under eight years old, I applaud him for this observation.

Every country has ethnic groups and minorities; they clash with the majority and with each other. Ding believes this is a good excuse for autocratic rule.

So, there you are, Southeast Asia: put democracy on hold to “integrate” your ethnic minorities. When your people start setting themselves on fire in protest of your cruelty and marginalization, then, maybe, talk about having some reform sometime in the next five decades, maybe. China-style.

The coverage of Obama was surprising, let alone the editorial onslaught, especially considering the orders from the Central Propaganda Department released in China Digital Times’s Ministry of Truth (note: if you don’t read CDT, you should) on November 16. The message from the propaganda department read, “During US President Obama’s trips to Thailand, Cambodia and Myanmar (Burma), Chinese leaders will simultaneously visit Thailand and Cambodia. Use only Xinhua copy. Downplay Obama’s visit.”

Yes, they actually say that. In case you were wondering, news coverage pretty much went by the letter, but Obama, and the US, got a thorough party-line going-over in the editorials.

Despite kicking and screaming like a petulant child, the Chinese media didn’t get what it wanted. On December 12, the Phillipines will host a meeting with Vietnam, Brunei and Malaysia to discuss China’s ongoing fuckery in the South China Sea.

China made five main things clear about the ASEAN:

China’s preferred (and agreed upon) strategy is to deal with the countries one-by-one. Because if you’re gonna be a bully, you don’t pick on the whole chess club at once. Those geeky bastards will put a rook in your urethra.

The odds are stacked against those who want to talk about South China Sea issues.

Cambodia is the host country. Cambodia is an ancient word meaning “China’s little bitch-boy.” Prime minister Hun Sen went a bit too far by trying to capsize the whole argument in the chairman’s statement, saying that ASEAN leaders speak only with China on the matter, not to “internationalize” the matter. SEA don’t play that.

So, the CPC struck back in their flagship bullocks factory, People’s Daily, with “ASEAN Summit should not deviate from theme due to anxiety.”

No one is ever really angry with China in the Chinese media; no, they’re just scared, or confused, or anxious. Only China understands and is never, ever wrong.

These actions of the leaders of the United States, Japan, and the Philippines reflect the restlessness caused by China’s huge increase in political and economic strength. The East Asia region is looking at China with ambivalent love and fear. The United States and Japan is trying to take advantage of such ambivalent psychology to stealthily substitute political issues for economic issues, thus containing China’s rise. [...]

ASEAN countries should not regard China as an imaginary enemy. No enemy would remain not to devalue its currency at the risk of its own economic downside during the 1997 Asian financial crisis. Compared to the style of some country that did not care the life or death of others but simply devalued its currency, one can easily tell which is better and which is worse.

The arrival of the Asian century does not exclude the participation of the United States. Asia welcomes the United States to strengthen ties with Asian countries through normal trade and economic activities. But any attempt to hook in “partners” and to isolate China will certainly end up void and vain.

Some country… brilliant. The subtlety of a mentally deficient elephant slamming its sweaty genitals in your face.

3. Wen is upset at the East Asia Summit, comforts himself with family’s 2.7 billion dollars

On Thursday, this hit: “Harassing East Asia summit with island disputes was unwise.”

Raising the disputes on such an occasion is against the spirit of the Association of Southeast Asian Nations (ASEAN) and risks escalating tension and harming the cooperative atmosphere among East Asian countries. [...]

The Philippines and Vietnam, however, distracted the summit by doggedly highlighting the disputes. When Cambodia, this year’s ASEAN chair, said at a meeting on Monday that the 10 ASEAN nations had agreed not to “internationalize” the rifts, Philippine President Benigno Aquino defied basic diplomatic rules to blatantly rebuke Cambodian Prime Minister Hun Sen. [...]

The Philippines’ and Vietnam’s disregard of diplomatic protocols was apparently driven by their coveting of the rich oil, gas and maritime resources in the South China Sea…China has a persistent and clear stance on the sovereignty over the Nansha Islands and their adjacent waters. [...]

Both Vietnam and the Philippines have been playing a crying for help card to seek bolster from countries outside the region, notably, the United States amid its Pivot to Asia strategy.

Those two countries intended to press China with the hands of U.S. President Barrack Obama [note: yes, they spelled his name wrong], who also attended the summit… Repeating the issue of navigation freedom in South China Sea was intended to disguise the real motive of certain countries.

China didn’t really get what it wanted out of the recent meetings in the South China Sea, but, then again, no one else did either.

With China’s current tone and stance, it’s perfectly acceptable for Southeast Asian countries to be scared and upset. As a matter of fact, I would suggest they give up altogether. They’ve no chance.

One thing becomes clear when looking at the state-run papers: China will never concede ownership of anything. China’s media is cruel, bloody minded and ignorant on matters of hypothetical sovereignty, and the government can easily organize mass hysteria, zealous patriotism and violence using these party papers. Convinced of their manifest destiny to run the South China Sea through sheer force of will and manufactured superiority, China’s nationalistic zeal is fueled by the media on an unstoppable diet of jingoism and sycophancy. The propaganda rags control so, so many, a menacing and relentless force.

On the other hand… 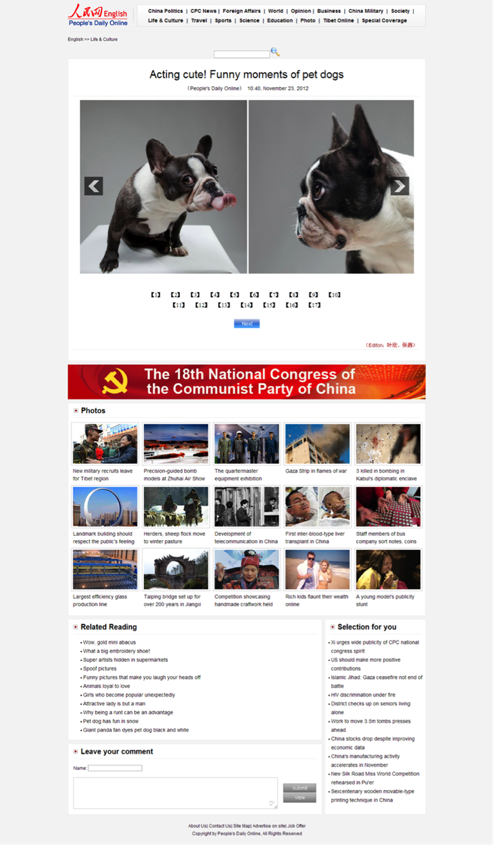 9 Responses to “To Serve People: A Southeast Asian Platter Of Islands That’s China’s, All China’s”