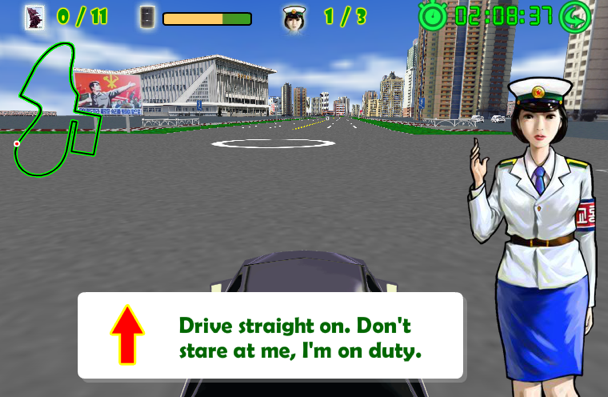 Our friends at Koryo Tours have posted an online game called Pyongyang Racer, which they’re advertising as the “first computer game out of North Korea” (is there any reason to disbelieve it?). Players race around the “city of willows” collecting barrels of fuel and avoiding obstacles such as cars. (True to the Pyongyang I visited last summer, there are few vehicles and very, very clean roads.) You’ll pass the Arch of Triumph (based of Paris’s Arc de Triomphe, only bigger), the Victory Monument, the (now-complete!) Ryugyong Hotel, and the Juche Tower, the tallest stone structure in the world — barely eclipsing the Washington Monument.

The game was developed in the DPRK and commissioned by Koryo, the leading Western tour agency for trips into North Korea. If you’d like to have a polemics-free discussion about the ethics of DPRK tourism, I’d be happy to meet you in the comments section.

4 Responses to “Play: Pyongyang Racer, The First Computer Game To Come Out Of North Korea”