It’s not perfect, but for a chalk etching on a random sidewalk, no one’s complaining.

Lan Gui, 50, a vagabond artist who’s been traveling from city to city for more than 20 years, is probably best known for his street Mona Lisas. Guizhou-China Morning Post profiled the man in April 2011: he lost his left leg after an illness at the age of 16 that left his family penniless. He began working to make a living, but his disability made it difficult on him. That’s when he thought, “I might as well sell art.”

At the age of 29 — knowing it would only supply a meager earning — Lan Gui began drawing full-time on the streets and has relied on donations to get by. Here’s his work from last year: 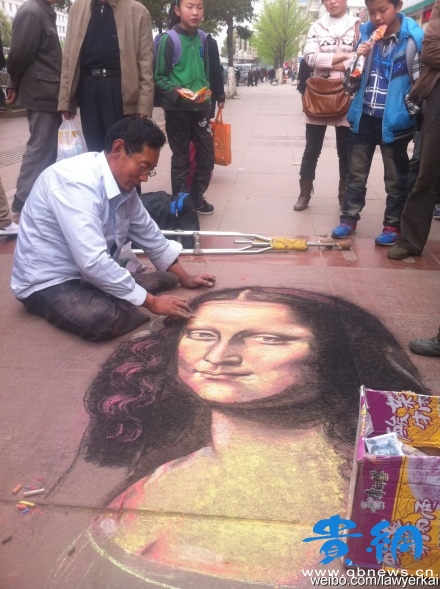 UPDATE, 2:40 pm: Found another video of the man from three years ago (Youku version here):

During the short conversation at the end of the video, his words were so nice. He said he did not mind how much money people gave him, but he was very glad for bringing happiness to people whoever saw his work. He also asked “I don’t know how the foreign artists draw the picture [Mona Lisa], I just use burned wood and chalks.”