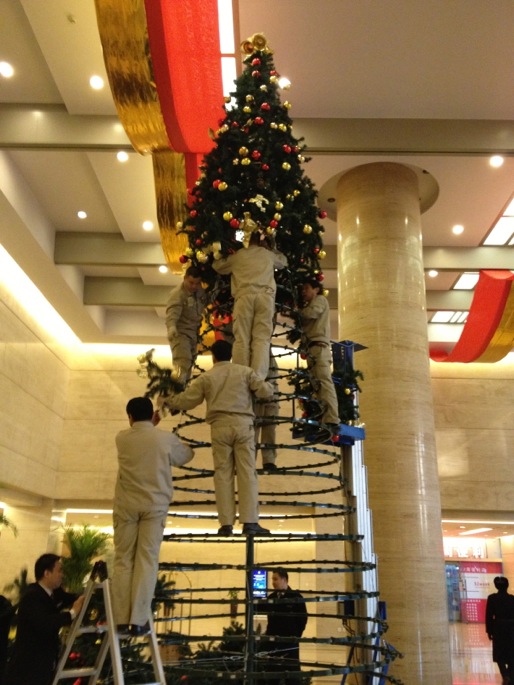 “Elves in Beijing,” by The Good Doctor

Skyfall coming to China on January 21! “The date means that Sony and MGM’s newest 007 film will likely roll out ahead of Warner Bros.’ Middle-earth epic ‘The Hobbit,’ which is expected to open in February, after China’s Feb. 9 Golden Week holidays are under way.” (The Wrap)

China tests world’s longest express rail. “China tested its 2,298-kilometer (1,428-mile) high-speed rail line, the longest in the world, as it prepares to start passenger service on Dec. 26. // Bullet-trains on the line from Beijing to southern Chinese city of Guangzhou can run at an average speed of 300 kilometers per hour, the official Xinhua news agency said. It will shorten the rail travel time from the capital to the Pearl River Delta to about eight hours from the previous 24 hours.” (Bloomberg)

Actually, can be pretty annoying for these homeowners. “Annoyed homeowners have slammed the door on tourists seeking to visit their beautiful courtyard houses for a glimpse at life in Old Beijing, complaining that under a local government scheme they received hundreds of visitors at all hours, but never received a penny or any logistical support for their troubles. // The Dashilan management committee held a contest in July for the old homes in the historic area, which lies west of the Qianman shopping street near Tiananmen Square.” (Global Times)

But sex scandals are so entertaining. “Speaking in the wake of a spate of sex scandals involving Communist Party officials, Mei Heqing, a senior member of an anti-corruption body in the city of Guangzhou, urged officials to rein in their libidos or face the consequences. // Mr Mei said that in 2012 his unit had investigated 61 government officials for corruption. ‘Thirty-eight of them, nearly 63%, have been found to keep mistresses or have more than one sexual partner,’ he told a news conference according to the state-controlled China Daily newspaper.” (The Telegraph)

On one area needing reform. “I believe the most critical sector to watch is reform of China’s State Owned Enterprises (SOEs).  In 10 years, the Hu-Wen government essentially did nothing to deepen or strengthen the 1994 Company Law which set out to privatize and bring efficiencies to the state sector.   Now with the Youth League clique backpedaling, Xi and the Princelings will have a chance to rein in state-owned industrial sector. – after all the Princelings built the party profit machine in the 1990s vis-à-vis the SOE system.” (Brian Eyler, Rectified.name)

A helpful service. “A year after the Beijing Red Cross announced its new emergency air rescue service, it has only been used twice, by a foreigner and a patient covered by a foreign insurance policy. // The service is out of reach to most Chinese. Even in life-threatening situations, people must pay upfront to use the service. // ‘Now the air emergency rescue services can cost over 100,000 yuan ($16,000) a trip, which is too expensive for most people,’ Li Chongsen, the spokesman of Beijing Red Cross, told the Global Times.” (Global Times)

“Chairman George,” the Canadian troubadour. “Of the thousands of federal public servants whose jobs disappeared this year, few have a Plan B quite like that of George Sapounidis. // His was one of the 10,980 positions the government erased within six months of unveiling a budget with billions in spending cuts. // A career mathematician at Statistics Canada, he has a doctorate from the University of Toronto and spent his work days designing business surveys. But starting in 2000, through bits of vacation time here and there, he began to cultivate another life on the other side of the world.” (Globe and Mail)

Gangnam getting official recognition. “‘Gangnam Style,’ Psy’s signature song, has been chosen along with ‘fiscal cliff’ and ‘Romneyshambles’ as some of Collins Dictionary’s words of the year.” (Sina)

Hmm. “Female body issues: The most ironic thing about me dating only Asian guys, I feel, is my body type. At 5’9”, 150 lbs and hips to spare, I don’t think I’m the kind of girl Asian guys typically go for, resulting in some female body issues.” (Asian Man White Woman)

How to tweet without a VPN in China. (Tech in Asia)