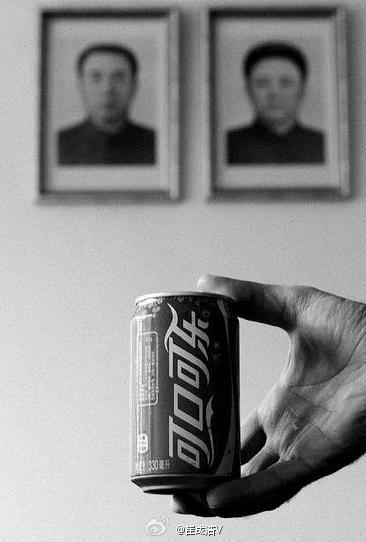 “At my residence in Beijing, with Coke toast first to the supreme leaders!”

And with that first message on June 29, Sina Weibo user @作家崔成浩 – literally, “Writer Choi Seongho” – launched himself into Chinese social media fame. From the very beginning, as a self-proclaimed North Korean patriot, he has written solely to glorify the Democratic People’s Republic of Korea, and has attracted more than 480,000 followers while following no one in turn.

But all is not what it seems. Far from being a true believer in the Juche Ideal, Choi just might be this country’s foremost satirist.

The typical netizen reacts to him with scorn and ridicule, but Choi responds with the sort of indifference that characterizes a master Internet troll. He continues to sing North Korean political propaganda, publicize portraits of Kim Jong-il (comparing him to “the sun that every human being admires”), and celebrate DPRK accomplishments, such as satellite launches.

When netizens attack — e.g., @Korea_中国法师: “A tyranny that starves countless citizens and makes countless lives suffer, shameless and evil dictator!” — the patriot counters with ridiculous phrases that have since entered Weibo lexicon: “Watch your tone!” he writes. “Anyone who defies the supreme leader will not be excused. We are serious and will track your longitude and latitude.”

Serious? Only to the few — and they are very much the minority — who aren’t in on the joke.

During the once-in-a-decade political transition of the 18th Party Congress, when China’s security forces went into overdrive, banning innocuous activities like flying toy helicopters and buying fruit knives, Choi wrote, “Sometimes what a person says can change the world, for example, one person yells, Look, they are having a meeting on the boat!”

One Sina Weibo user, who may or may not have gotten it, replied: “How dare you insult the intelligence and dignity of China! Report your longitude and latitude, we are serious!” But Choi’s “meeting on the boat” is actually a reference to CPC history – a highly secretive meeting in 1921 held on a red boat, in which Mao Zedong, along with 12 others, made the decision to establish the Communist Party — and hints at his subversive humor.

Sina does not reveal the identity of its users, making it hard to determine whether Choi is really from North Korea. His account does not come with the telltale “V” that signals his location or identity has been verified. In his profile, he simply stresses his heart is linked to — and would never leave — Pyongyang, capital of North Korea. Many netizens, however, suspect he is a Chinese national; others say he is actually South Korean, or possibly Korean American (he has posted in English before, but those are usually quickly deleted for whatever reason). Netizens often ask him to reveal his identity, but he either ignores them, ridicules them, or points them to this post. Most agree that he knows a lot about Chinese history and, as @棉花糖 puts it, “is unusually smart.”

Phoenix TV sought an interview with the elusive Choi last month, but Choi declined defiantly. He did add, however, that he would do it with Ivy Chu, whose adorable smile and attractive personality have endeared her to many male viewers. She appeared to openly flirt with Choi online, leading netizens to coin the term Ju-chu (竹体思想), a combination of the characters in Juche — North Korea’s (specifically, Kim Il-sung’s) ruling philosophy — and Ivy’s last name.

Choi’s online interview with Chu was shown on the Phoenix TV program “The Internet’s Hottest Item.” Here’s how it began:

Choi: Good Morning, Xiao Chu.
Ivy: Morning, Xiao Choi, the sun has risen from Taedong River. (Ed’s note: the Taedong River is a great North Korean river that Choi sometimes compares to the Supreme Leader.)
Choi: [three smiley emoticons]
Ivy: Are you nervous about today’s interview?
Choi: A member of the DPRK never gets nervous.
Ivy: I always thought you would keep your identity.
Choi: [sigh] Can I keep my longitude and latitude, though this is an interview?
Ivy: Sure. And you can choose to answer any of my questions.

Yes, it was that kind of interview. Other highlights:

Ivy: You mentioned that you were a reporter and a student studying abroad, does that mean you are a “princeling”?
Choi: My parents are farmers, never had official post. Even in the future, I will not become the father of princelings.

Ivy: But, you are also a writer, do you plan on writing a book? What kind of book?
Choi: A book that introduces the new prosperity of Communism. I am serious.

Ivy: Ever since you’ve become famous, so many weibo accounts have mimicked your style and used your name and even stated that you all are related, what do you say to that?
Choi: Perhaps I have the most number of relatives on Weibo, still counting every day. Unbearable, and I don’t know any of them. Be tolerable a little bit, maybe they also need “Pyongyang sytle.” [Note: he wrote "Pyongyang sytle" in English, and intentionally misspelled "style"]

Ivy: Then what do you think of your fame? With 450,000 to 460,000 fans, are you comfortable? And did you think of this outcome when you first started Weibo?
Choi: I did not expect it at all. And I follow no one. Perhaps it is because people are eager to learn about the Juche idea. And Choi will continue to warm their hearts with the sunshine with Juche.

Whoever Writer Choi Seongho is, he has succeeded in one key respect: by shedding light on North Korea’s cheesy propaganda, he’s shown how much China has changed in a generation. Perhaps that’s been his point all along. As @不能吃我 points out, “China used to be like this during Mao’s time. People knew nothing but to praise and worship. Glad that period is over.”

20 Responses to “Meet Sina Weibo Star Choi Seongho, A Self-Proclaimed North Korean Patriot Who Just Might Be This Country’s Most Brilliant Satirist”