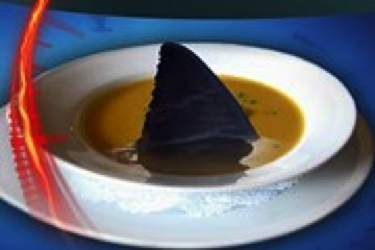 Traditional ideas of what animals should be eaten are under pressure in southern China, a region where it’s often said anything that walks, flies or swims is fit for the dinner table.

In Hong Kong, the controversy centers on shark fin soup, which has long been one of the city’s most popular dishes, especially among the city’s image-conscious elite who serve it at banquets and weddings as a conspicuous symbol of status and wealth.

In times past shark traders in Hong Kong felt free to set fins on the street to dry in the sun. But thanks to videos like this, environmental activists are beginning to convince ordinary citizens to object. The killing of sharks is especially cruel, they say – the fins are cut off and the animal is tossed back into the water; unable to swim, it slowly drowns – and many countries have already banned the practice.

But resistance to change can be fierce. Hong Kong is the world’s epicenter of the shark trade, accounting for an estimated 50-80% of the 73 million sharks killed for food per year. Thanks to China’s economic boom, the trade is estimated to be growing at 5% per year.

The extra scrutiny has simply pushed the trade above ground, specifically to the rooftops where the fins can prepped for sale without the disapproving eyes of Hong Kong’s public or nosy foreign tourists. 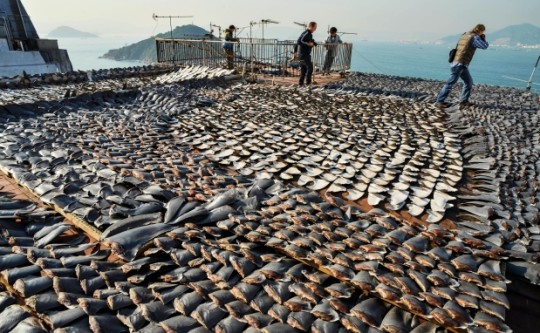 In addition, many see no good reason to stop eating shark. For them, the issue is much bigger than a simple bowl of soup. They see it as an assault by foreign thinking on traditional Chinese culture. Via a Forbes article from earlier this year:

Confronted with a rising tide of bans and boycotts, the outfits that sell shark fin are fighting back – just this week, with a high-profile onslaught of ads in the industry’s epicenter that says sharks aren’t endangered, and charges that Western cultural supremacy lies behind the global campaign to shun this unlikely delicacy.

Much like Japan’s sometimes puzzling determination to keep hunting whales, some Chinese feel it’s their nationalistic duty to eat whatever they want. And if foreigners can eat chickens and cows in massive numbers, why can’t Asians eat the animals they like?

Many of the new residents of Shenzhen are migrant workers who, away from their families, have taken dogs as companions to cure their loneliness. Add to that a rapidly growing middle class who view their expensive pure breed retriever, labrador or poodle the same way some Hong Kongers see eating shark – as a highly visible symbol of status and wealth — and what you end up with is a city where people who love dogs as pets mix with people who love them more for supper.

These paradigms sometimes clash: recently a mini-controversy erupted when Shenzhen University decided to serve a dog hot pot dish in one of the school canteens. In years past, such a move wouldn’t have attracted much attention, but this time many students objected and sent letters of protest directly to the president of the school. Without resistance the university abandoned the idea.

However, this anecdote doesn’t mean dog isn’t widely available in other parts of Shenzhen. And it’s unlikely that such traditional foods will disappear from South China dinner tables anytime soon.

For the meantime, environmentalists and pet lovers will just have to take solace in this, via AP:

“With the middle class becoming more affluent, the demand is definitely growing” in mainland China, [environmental campaigner Gary] Stokes said. “But in Hong Kong it’s actually decreasing. I think that in Hong Kong people are starting to realize that it’s not that cool.”

Traditions might die hard, but at least perceptions can — and do — change.

10 Responses to “Actually, There Are Those In Hong Kong And Shenzhen Who Challenge Traditional Food Culture”