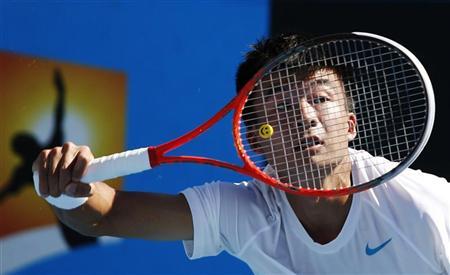 Congratulations to Wu Di for qualifying for the Australian Open!

And congratulations to the Chinese education system for its success in instilling in Tennis Player Wu the notion that no matter where a mainland Chinese person travels, everyone else is still the foreigner.

As Reuters reports, Wu was shocked that laowai in Australia would actually cheer someone from China, thereby causing Wu to suffer from cognitive dissonance and require counseling upon his return.

“I was shocked,” Wu, who was mobbed after the match by fans wearing his country’s red national flag, told reporters. “In domestic tournaments, it’s hard enough getting Chinese to cheer me on, let alone foreigners.

“But there were foreigners here telling me to ‘come on!’. That was the first time that’s happened, so I felt really happy to have that.”

(Okay, I made up that last part about counseling.)

Wu was also impressed by fans wearing the Chinese flag as superman capes, though these “fans” were presumably not paid to attend by the Chinese Embassy. (They are also not, strictly speaking, laowai, so let’s call them “overseas Chinese” for perpetuity until the day they return to the welcoming bosom of the sacred motherland.)

Fortunately for China, Li Na, the other member of the Wuhan tennis clique, is still in the tournament. She gave Wu sage advice via a pre-bedtime (oooh-la-la) text: “Don’t think about tennis.”

10 Responses to “China’s First Male Tennis Player In A Major In 54 Years, Wu Di, Amazed “Foreigners” Cheered Him In Australia”