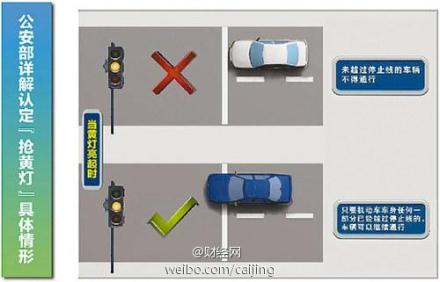 I think that’s how the nursery rhyme goes.

On January 1, China enacted a new traffic regulation that changes the meaning of yellow lights: from “caution” to “stop.” Drivers must now brake when they see yellow as long as they’re not yet in the intersection — ignoring basic physics which dictate deceleration is a change in speed over time.

The rule was a reaction to spates of traffic accidents, but drivers have sensibly asked whether there isn’t a better way. Introducing a stupid nursery rhyme seems to be as sensible, if not more so.

And will the law really be enforced? According to Danwei:

Yet when a journalist from Orient Today (东方今报) from Henan province yesterday went to observe the traffic in Zhengzhou (郑州), capital of Henan province, he found the usual black Audis and other cars jumping yellow lights, some drivers talking on their mobile phones while they did so, as if there were no new “most severe traffic law in history” in force in China.

Indeed, it seems not just “black Audis” — i.e. cars probably driven by government officials — but other cars — every car? — were ignoring the new regulation. Something might be wrong with the regulation, then?

Offbeat China (above image via them) has translated some other funny netizen responses:

Netizen 俞白眉, however, proposed an entirely different model: “There are still problems with 3-color traffic lights. There should be 7 colors, red, orange, yellow, green, blue, indigo and velvet. Each color signifies a different speed limit. Red is 0 mph, orange is 5 mph, yellow is 20 mph, green is normal speed, and so on so forth…velvet would be low-altitude flying. If 7-color traffic light still doesn’t work, we can try 256 colors.” Opposite to 俞白眉’s proposal, some others went minimalist. Netizen 光头王凯 suggested: “Given the logic of the new rule, neither yellow lights nor red lights have a reason to stay. One green light alone can do the job – green light on, pass; green light off, stop.”

Let’s see how long until the first rear-end accident caused by a car braking suddenly at yellow.