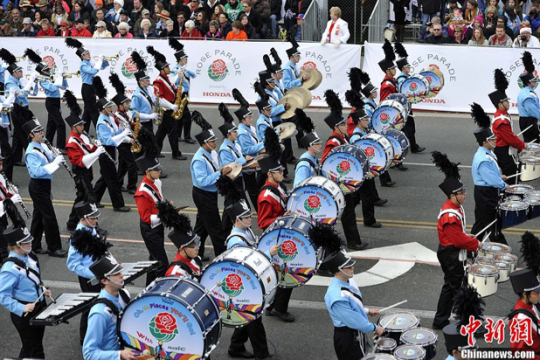 This is a nice story, which you should check out if you’re into that kind of thing. At the famous New Year’s Day Rose Bowl parade on Tuesday in Pasadena, California, 57 middle school students from Beijing marched alongside San Jose’s Valley Christian High School.

CNN has the inspiring story of how it all came together:

A few years ago, when [band director Troy] Gunter and the band returned from a trip to Cambodia, an idea struck: Why not apply to the Rose Parade now, with an international partner?

Problem was, they didn’t really know any overseas bands. They weren’t sure how they could practice together, let alone organize for the grandest stage a high school marching band can reach.

With the 2013 parade deadline looming, they got in touch with Beijing’s No. 57 High School. The band’s director, Lu Jin, was familiar with the Rose Parade, and his band had played a few major events, including the 2008 Beijing Olympics.

It wasn’t easy — not by a long shot — but Gunther and the Chinese students managed to bond at just right moment, and at the 124th Tournament of Roses Parade, they hit all the right notes. China News has more pictures.