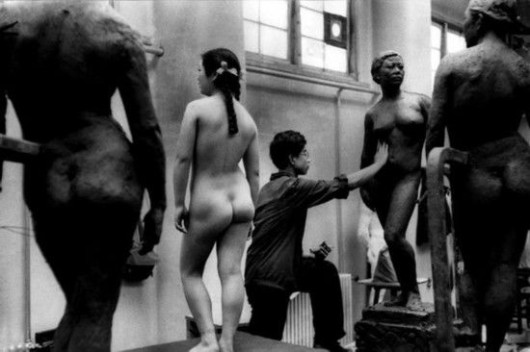 Photo by French photographer Marc Riboud in the 1950s, via Sina.

Foxconn strike in Beijing? “Around 1,000 workers at a Beijing factory belonging to Foxconn, maker of Apple’s iPhone, walked out this week amid a dispute over end-of-year holiday privileges and bonuses, a company manager said on Wednesday.” (Radio Free Asia)

Corollary: “After reports of more than a thousand workers going on strike at a Beijing factory surfaced earlier this week, Foxconn has denied that the alleged incident took place and dismissed them as ‘without foundation and completely inaccurate.’ // Foxconn did confirm that it had hosted a town hall meeting with many of its employees to discuss ‘matters relating to salary and bonuses,’ but it said there was no disruption to its operations.” (The Next Web)

“Wastelands of Beijing.” “This article is a tour through some of the more spectacular wastelands of contemporary Beijing, places that will be developed into something entirely different at some point in the future when the interest groups that control the land and construction finally make a deal they can live with.” (Robert Foyle Hunwick, Danwei)

That Chongqing outfit that busted a Chinese official by secretly filming a sex tape? They’re busted, too. “Chinese police in the inland port city of Chongqing have busted a ring that extorted local officials with secretly-filmed video of their encounters with young women, the state-run Xinhua news agency said on Thursday.” (Reuters)

At least he didn’t hurt anyone. “A man was arrested for deliberately destroying a luxury car worth almost 10 million yuan during a test drive on January 15 at Panzhihua in Sichuan, according to media reports. // Zhou Wei (not his real name), 26, hit the car with a metal object used by cleaners when he arrived at the home of his former-mother-in-law. He had taken the expensive vehicle for a test-drive.” (SCMP)