Quite the scene unfolded in Guangzhou on Saturday night, and we don’t mean the Southern Weekly strike. The video from Guangzhou that everyone is watching — more than 1.3 million views in the seven hours since it was uploaded to Youku — is the tale of an anonymous bare-legged young lady — dubbed “Beautiful Leg Heroine” — who subdued a blade-wielding madwoman with one swift kick.

“She walks the street with a pair of exposed snow-white legs, and they pack some serious kung-fu,” says the news anchor by way of introduction. “With just one move, she rescued a woman trying to commit suicide on the street.”

The video was taken by a woman surnamed Li, who said that at 8:20 pm, she exited a fast-food restaurant to see a 30-something lady in black holding scissors and screaming nonsense about the end of the world, “like a crazy.” The woman’s hand was bleeding, and Li said it looked like she wanted to further injure herself.

Those who tried to calm her were chased away. And then, to prove her craziness, the woman began scattering hundred- and fifty-yuan banknotes in the air.

Eventually, our hero arrives wearing short shorts and knee-high boots. She can’t be more than 20 years old, we’re told. And if we continue down this story’s descriptive arc, let’s just right out and say that she’s Guangzhou’s answer to Sally Jupiter or Wonder Woman.

(Interlude: at the 1:41 mark, we get to the amazing part of the video — the animated dramatization. You’d do fine just starting here.)

The 20-year-old picks up the money the woman in black has just tossed, then cautiously approaches. A male TV anchor (where did he come from?) tells us exactly where the two were standing, even though we see it in the next scene. FLASH. POW! With one kick, the blade is down, the woman neutralized. Those nearby pick up the money. (Li said no one pocketed any.)

The young lady slips off into the night, never to be seen again. (Or yet. She’ll be seen again, guaranteed — at which point, perhaps we’re told this was all a setup. If this is so, please don’t tell us.) Be well, “Beautiful Leg Heroine.” We don’t deserve you. 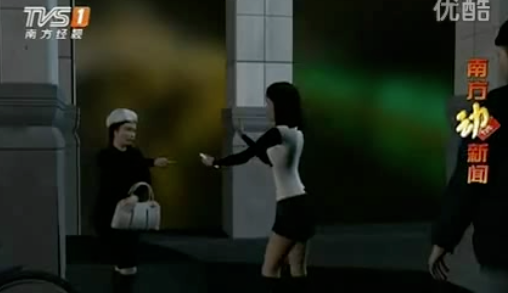 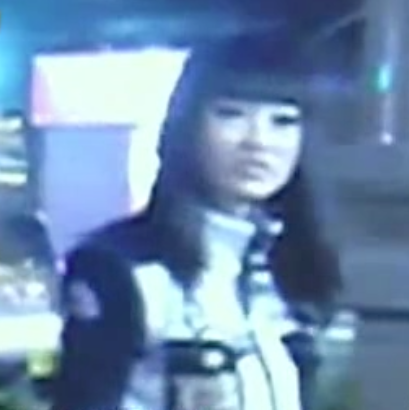