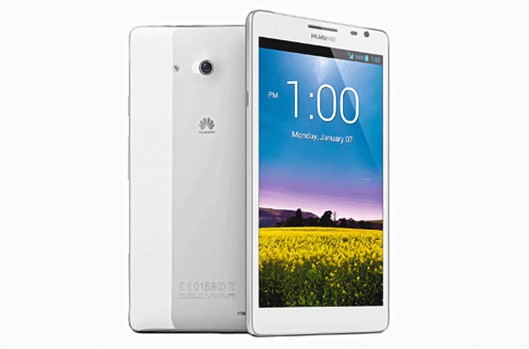 Ever since I realized that Huawei doesn’t just make cheap phones, I’ve found them to be a fascinating company. They certainly have PR and political problems, but they’re one of the only Chinese tech companies that’s competitive globally. And what they’ve been doing with telecoms equipment, they’re now looking to do with smartphones.*

At the Consumer Electronics Show in Las Vegas, they announced on Monday two of what will be the world’s largest smartphones, weighing in at 6.1 inches. There’s a big “but” coming… they’re only going to be sold in China, with plans for the Ascend D2 to be sold in Japan later this year.

6.1 inches is huge. By my unscientific estimation, it’s about the size of my hand, maybe bigger. Huawei is also positioning it not only as a big’un, but also a bad’un, with specs on the Ascend Mate coming close to other high-end phones: 1.5 Ghz quadcore processor, 8-megapixel back-facing camera, and a poo-poo’ed 1280 x 720 resolution.**

Who would buy such a phone, I hear you ask. To that I answer: it doesn’t matter how big your hands are. One would think that in a city of over 20 million people there would be a tendency toward smaller cars given every decreasing parking spaces, but in Beijing SUVs, and even Hummers, are quite popular. Chinese people, like Americans, enjoy big things.

When Samsung debuted its Galaxy Note (at 5.1 inches) and subsequent Galaxy Note II (at 5.5), there was justified skepticism: “It’s too big to be a phone. It’s too small to be a tablet.” However, as we’ve seen since, the Galaxy Note has gone on to be one of Samsung’s most successful products. And one of their largest markets is China.

In markets such as Beijing, where sometimes commutes can be three hours one way, a handheld entertainment center is a lifesaver. Add in a little traditional Chinese frugality*** and BAM! you have the phablet’s target market: big enough to watch movies and play games, small enough to use Weixin.

With the Ascend Mate and Ascend D2, Huawei is showing that they’d like their phones to be taken a bit more seriously, even if their bread and butter will still be base stations and cheap phones.

*They also make tablets, but from what I’ve seen in person, they’re really terrible.

That means the pixels per inch (PPI) will be higher than the iPad mini, but lower than the Galaxy Note 2

***One would think with so many cheap smartphone options out there, PSP sightings would be a rarity. The opposite is in fact true. Almost every time I take the subway (twice M-F), I see at least one fellow passenger using one.