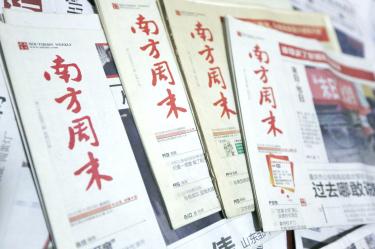 Media reports say that some Southern Weekly journalists were told they could return to their former posts and that the paper would publish today, as normal. Here we are, slipping into the noon hour, and…

Southern Weekend has yet to appear on newsstands in Guangzhou, as it usually does on Thursday mornings. Delayed.

We’ll keep an eye on people who are in Guangzhou keeping an eye on this.

Meanwhile, ponder this: even if things return to “normal,” how long will the “peace” last? How long until authorities decide the foreign media has stopped caring, and pay out some early pensions?

UPDATE, 11:23 am: Mark MacKinnon of Canada’s The Globe and Mail:

Here’s the front page of this week’s Southern Weekly twitter.com/28wordslater/s…

In it first edition since a row over censorship began, Guangzhou newspaper Southern Weekly said in an editorial on Thursday that Communist regulation of the media must “keep pace with the times”.

“It’s fundamental that the party regulates the press, but its method of regulation needs to be advanced to keep pace with the times,” the Southern Weekly said, without making direct reference to the controversy.

UPDATE, 12:01 pm: Reuters reports that the paper is out in Beijing and Shanghai, but not Guangzhou:

The newspaper, which is published on Thursdays, was not available in at least six newsstands in Guangzhou, which normally carry the paper. The paper appeared as normal in Beijing, carrying a cover story on the aftermath of a fire in an orphanage in central Henan province.

“It’s not coming today,” said one newspaper seller in a kiosk near the Southern Weekly’s headquarters in Guangzhou. “I don’t know why it wasn’t delivered,” he said, as a stream of early morning commuters bought other newspapers from his stand.

In Shanghai, two sections of the paper were missing — one focused on a new regulation on land reclamation and the other on “the dramatic changes” in reform.

When asked about the missing Guangzhou copies, a woman called Zhou at the Southern Weekly’s distribution office said: “Today’s paper has been published as normal, but may not have arrived at newspaper kiosks yet, which is also normal. It should be available for purchase within today”.