After winning the first set of the Australian Open final against defending champ and world No. 1 Victoria Azarenka, Li Na rolled her ankle — twice, the second time immediately following a 10-minute fireworks display in honor of Australia Day — before falling in three sets 4-6, 6-4, 6-3.

That Azarenka was on the other end of two medical timeouts was more than a little ironic. In the semifinal against American Sloane Stephens, it was Azarenka’s strategically called medical timeout that incited worldwide accusations of gamesmanship and “bending the rules.” Li Na commented on that situation as well before the finals, saying, “You know, everyone is different. Because for me, I would never use that (medical timeout). But I don’t know how (it) is (with) another athlete or another player because everyone is different. I couldn’t say, ‘Oh, it’s wrong’ or ‘it’s right.’”

Azarenka’s timeout in the semis came after no discernible video evidence of injury, and caused more than a few observers to howl that she was just buying herself a 10-minute break to settle her nerves. Everyone, however, could see Li Na’s injury: slow-motion video of her left ankle rolling was shown on Rod Laver Court’s big screens and every television. 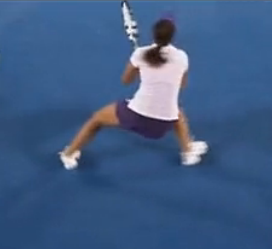 THIS is why we have medical time-outs….

Chinese announcers calling the match handled themselves very professionally. Fast forward to the 113-minute mark in the below video: the female commentator says right away that the 10-minute fireworks break may have caused Li Na to go cold and turn her ankle again. She immediately saw that Li Na also hit her head — a trainer ended up administering a concussion test on the court.

You can relive this bizarre but entertaining match in its entirety on Youku: